How long can nano particulates linger in earths stratosphere? 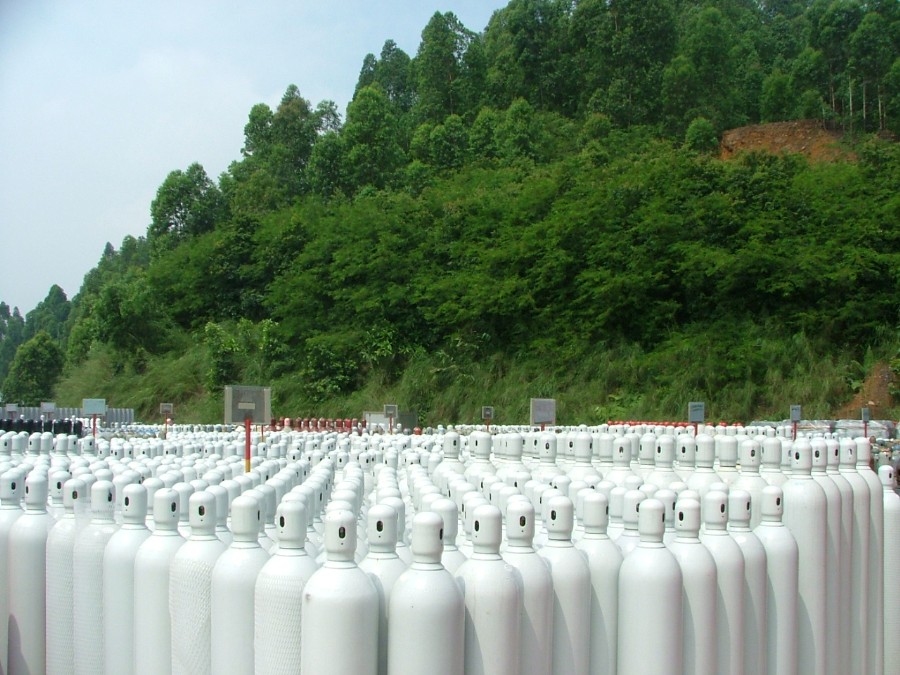 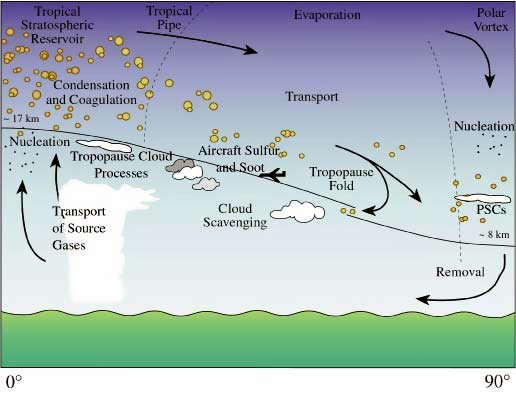 The Debate:  How long does it take for nano particles (that are sprayed in our skies)  to finally hit earths surface.  This article sets out to explain the facts  by means of   scientific studies and  articles that explore  the shelf life of an aerosol, especially for sulfur dioxide and carbonyl sulfide, both  suitable geoengineering particle uses.

Weighing the pros and cons of stratospheric geoengineering
“Natural aerosols like dust have always been present, but their growth has been greatly outpaced by that of anthropogenic aerosols over the last half-century. These are produced when various precursor gases emitted from natural and human activities, such as sulfur dioxide (SO2) and dimethyl sulfide (DMS), are oxidized through a series of reactions in the stratosphere to sulfuric acid (H2SO4) gas. (At high enough concentrations and under the right conditions, they can cause acid rain.)

The resulting aerosol particles tend to be long-lived (though not in comparison to greenhouse gases), often lasting for several years. This is largely due to the stratosphere’s stability: warmer layers lie on top of the cooler layers, and there is very little mixing between the two.”

Sulphur dioxide (SO2) introduction
“The lifetime of sulphur dioxide molecules in the troposphere is a few days. The amount is highly variable, above a low background concentration. It is removed from the troposphere:
– in gas phase by formation of suphuric acid, which forms condensation nuclei for aerosols and clouds and acidifies the rain;
– directly, by way of an uptake on aerosols and clouds, which leads to dry and wet acid depositions.

The Stratospheric Shield (pdf file)
“The eruption of Mt. Pinatubo in 1991 gave us an opportunity to learn many things about using sulfur-based aerosols to cool the Earth. The aerosols it spewed into the stratosphere remained there for an average of 1-2 years before falling down through the troposphere.”

This article explains a plan to spray sulfur dioxide into the stratosphere, seems to be part of MIT project.
The Unintended Consequences of Sulfate Aerosols in the Troposphere and Lower Stratosphere
“There are many variables that must be taken into account in this experiment, including particle size, altitude and location of launch as well as the lifetime of the aerosol. The particles from the Mt. Pinatubo eruption had a 0.35 μm radius, however smaller particles have longer stratospheric lifetimes, so fewer injections would be needed (Rasch et al., 2008). Thus, this experiment will use particles with a 0.25 μm radius, which have an average stratospheric lifetime of two years (Budyko, 1977). I propose launching the aerosols at latitude 68ºN in an effort to confine the effects of the scheme to the Arctic. The longitude is arbitrary due to the atmospheric properties (Robock et al., 2008). Robock et al. (2009) suggests the Gunnbjørn Fjeld in Greenland, located at 68ºN, because it is the highest point in the Arctic, thus requiring less energy to get the material to the stratosphere. Because aerosols have a longer lifetime in the stratosphere than troposphere, they will be launched into the lower stratosphere, an altitude between 10-15 km (Robock et al., 2008).

In an effort to confine the climatic response to geoengineering, a lower rate of injection is used, and again, following the simulation of Robock et al.(2008), the sulfate aerosols will be injected at a rate of 3 Mt/annum. This is suitable for an experiment, because it is equivalent to a Pinatubo eruption every 6.67 years, and would cause a sulfate level that would not overburden the Earth’s natural capacity. The experiment will be continued for 10 years, long enough to see a decrease in global average surface temperature according to Robock et al. (2008). This would mean over 10 years, a total of 30 Mt SO2 will be introduced into the lower stratosphere.”

Stratospheric Processes And their Role in Climate, Report on the Assessment of Stratospheric Aerosol Properties: New Data Record, but no Trend
“The aerosol in the air masses transported into the mid and high latitudes continues to evolve through microphysical processes, such as evaporation at the upper edge of the aerosol layer and nucleation/re-condensation during descent. The air descends diabatically to the lowermost stratosphere where it can eventually be removed in the troposphere through quasi-isentropic transport of the air in tropopause folds that is the dominant removal mechanisms for stratospheric aerosol. Furthermore, throughout the lifetime of the aerosol, gravitational settling adds to the removal of these particles. Due to the long lifetime of the particles, their sedimentation velocities (~ 100 m/month for particles with 0.1 mm radius and strongly growing for larger ones) cannot be neglected. Additional removal occurs over the poles when the sulfuric acid particles serve as sites for polar stratospheric cloud (PSC) particle formation. Some PSC particles composed of nitric acid hydrate or ice can grow to several microns in diameter and sediment rapidly to the tropopause, taking included sulfuric acid particles with them. Observations clearly show the seasonal reduction in polar aerosol mass following periods of PSCs.”

Carbonyl Sulfide is part of the  geoengineering formula:
Department of Atmospheric and Oceanic Sciences (ATOC) of University of Colorado – Geoengineering

(ABOVE: “The novel feature is that carbonyl sulfide comes out of volcanoes nowadays and presumably has always done so,” Orgel says. Past experiments to induce the condensing reaction of amino acids into peptides have used several different reagents that were not necessarily present in Earth’s atmosphere at or prior to the origin of life.)

First, a loading of 1 Tg S in the stratosphere yields a global average vertical optical depth of about 0.007 in the visible and corresponds to a global average sulfur mixing ratio of ~1 nmol/mole, about six times more than the natural background (Albritton et al., 2001). Second, to derive the radiative forcing caused by the presence of 1 Tg S in the stratosphere, we adopt a simple approach based on the experience gained from the Mount Pinatubo volcanic eruption. For the Mount Pinatubo eruption, Hansen et al. (1992) calculated a radiative cooling of 4.5 W/m2 caused by 6 Tg S, the amount of S that remained in the stratosphere as sulfate six months after the eruption from initially 10 Tg S (Bluth et al., 1992). Linear downscaling results in a sulfate climate cooling efﬁciency of 0.75 W/m2 per Tg S in the stratosphere. The estimated annual cost to put 1 Tg S in the stratosphere, based on information by the NAS (1992), at that time would have been US $25 billion (NAS, 1992; Ron Nielsen, personal communication). Thus, in order to compensate for enhanced climate warming by the removal of anthropogenic aerosol (an uncertain mean value of 1.4 W/m, according to Crutzen and Ramanathan (2003)), a stratospheric sulfate loading of 1.9 Tg S would be required, producing an optical depth of 1.3%. This can be achieved by a continuous deployment of about 1–2 Tg S per year….”

“To compensate for a doubling of CO2 , which causes a greenhouse warming of 4 W/m2 , the required continuous stratospheric sulfate loading would be a sizeable 5.3 Tg S, producing an optical depth of about 0.04.”

Wikipedia – Carbonyl sulfide
“Lifespan of aerosols — Tropospheric sulfur aerosols are short lived.[19] Delivery of particles into the lower stratosphere in the arctic will typically ensure that they remain aloft only for a few weeks or months, as air in this region is predominantly descending.[20] To ensure endurance, higher-altitude delivery is needed, ensuring a typical endurance of several years by enabling injection into the rising leg of the Brewer-Dobson circulation above the tropical tropopause. Further, sizing of particles is crucial to their endurance.[21]”

These scientific documents suggest that nano particulates in the stratosphere can  last for months while particles in the troposphere only last for days. This maybe the reason why people are experiencing droughts, even when spraying has not occurred for months.

The document also suggest that intentional spraying is periodic because some of the particles will fall down in few days. In other words, when you see chemtrails or geoengineering being sprayed, it is most likely a maintenance program because the atmosphere has already reached a saturation point.

One thought on “How long can nano particulates linger in earths stratosphere?”