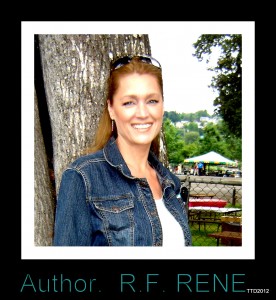 This was a fascinating show today! Please read the entire article, as there are so many Synchronicities in it for all of us!

About the book, from her blog:

“This is the first in a series of 7 novels designed to give the reader a glimpse into a not-too-distant future.  A world where national sovereignty and individual liberty has eroded.  A world where only those who “belong” are counted worthy, those who don’t are considered chattel. A time when the internet is strictly monitored, transportation and housing is assigned, personal and professional choices are dictated, private property is confiscated, home and family are redefined, access to healthcare is rationed, and being an outspoken dissenter is a crime.”

In the book “Sedition’s Gift: The Age of Man”,  author R.F. RENE states that “you will meet characters who are battling their own demons as well as the demons of others.  Struggling against forces which delight in pain and suffering and have since the beginning of time allied themselves against all that is good, right and true. You will meet characters worthy of redemption, as well as characters who are beyond all hope.  Some you will cry with, laugh with and root for.  Others you will find yourself cheering for their demise.” 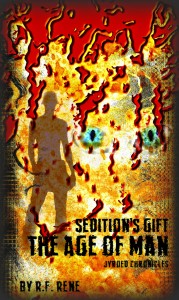 Author  R.F. RENE also stated that  ”  I want to be clear my story was complete and was being “polished” before I knew about most of these “conspiracies” and other worldwide facts.  My brother only a few months ago helped me swallow the Blue Pill… Matrix reference… And I started telling him, hey that was in my book, this is in my book… I already described that or this… over and over again…. It was really incredible how my book was reflecting the current events going on around the world.  I honestly didn’t know anything about GMO’s or vaccine that could kill you, or nano-bots…. Etc… that were being actively used around the globe.  I just did my own research about possible scary scenarios and wrote about them… only to find out that this stuff was REAL…” ~ Author,  RF RENE 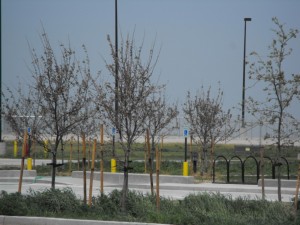 There is a quote from one of the books characters about “how to control a society”.  It was RF. Rene’s brother, Steven Jeffery Gunvaldson who asked her to watch a documentary  with him on the subject matter  FEMA camps, and a woman (in the film) who was “ in high up in a position of power said something incredibly close to what R.F. Rene’s character  had said in the book.  This alarmed R.F. Rene.

“The last step in ruling, truly conquering a people, one must destroy their sense of self.” He moved away from Watts, stepping outside the scope of the stadium lights. Into the blackness beyond. His ubiquitous voice, disembodied, phantasmagorical. “Pay attention Lieutenant. When the masses cease to believe in the inherent worth of the individual, then the only moral thing left is to protect the whole. If a society of individuals will not surrender and believe in the usurping moral value of the “whole” then they become the virus, the parasite, if you will. And for the good of the whole, they must be eradicated. Purged.” Quote from the book Seditions Gift: The Age of Man

“In 2009 after writing almost 90,000 words, I lost my zip drive… for a year… I looked every where could not find it…. I gave up.  Figure the universe was telling me something….  I was really devastated by it… all the creativity lost… my mom… started praying I would find the zip drive…  almost an exact year latter my mom prayed God would give me back my story… I didn’t know she’d prayed… one Sunday coming back from a church service… I took a bath,… when I got out… my daughters said they had a surprise for me… they had their lap top on the kitchen table open and  running… with my zip drive in  and my story uploaded on the computer… I said where did you find this…. They said they where playing a video game, and my eldest happened to look down and in the middle of the floor, next to her thigh was my missing zip drive….  I called my mom to tell her my story was found… and she told me a week prior to the discovery, she told God, “you know where it is… please give it back to her…” One year… of searching…. And suddenly it is in the middle of my living room floor.  Found one week after my mom prayed…. Weird but true….” ~R.F.  RENE

Above photo: Download your free copy of AGENDA 21 (As discussed on the radio program). Click Here:  FREE PAMPHLET  “Individual rights will have to take a back seat to the collective.” Harvey Ruvin, Vice Chairman, ICLEI. The Wildlands Project (Found on the Agenda 21 website)

Money Power behind the “Group” movement, and international control…

DEUS; Deipotent Enlightening Universal Society.  It was a philanthropic agency, whose patron members were wealthy internationalist, with a strong need to feel validated.

ATTENTION  TO ALL RADIO HOSTS!

R.F. Rene’s brother, Mr. Steven Jeffery Gunvaldson has also offered to do a documentary of  of Ms. Rene’s work, as well has championed her by soliciting many radio hosts for an interview for the author and her book.He is the person who contacted The Truth Denied, and we are officially the first radio interview that Ms. R.F. Rene has ever conducted live on the air! We are most honored and privileged to present this interview for our listening audience and readers!

If you know of anyone who would be interested in interviewing Ms. R.F. Rene, I suggest you contact her right away! This series of books is not only going to be very popular in the USA, but the entire world is going to be absolutely blown away! 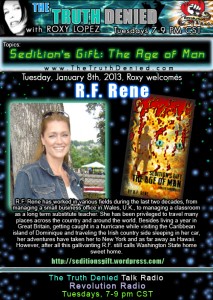 Sedition’s Gift: The Age of Man can be purchased at https://www.smashwords.com/profile/view/RFR

R.F. Rene has worked in various fields during the last two decades. From managing a small business office in Wales, U.K., to managing a classroom as a long term substitute teacher. She has been privileged to travel many places across the country and around the world. Besides living a year in Great Britain, getting caught in a hurricane while visiting the Caribbean island of Dominique, traveling the Irish country side sleeping in her car; her adventures have taken her to New York and as far away as Hawaii. However, after all this gallivanting R.F. still calls Washington State home sweet home. To see more on R.F. Rene click here: http://seditionsgift.wordpress.com/

For our readers:  What is the definition of the word SEDITION?

“In law, sedition is overt conduct, such as speech and organization that is deemed by the legal authority to tend toward insurrection against the established order. Sedition often includes subversion of a constitution and incitement of discontent (or resistance) to lawful authority. Sedition may include any commotion, though not aimed at direct and open violence against the laws. Seditious words in writing are seditious libel. A seditionist is one who engages in or promotes the interests of sedition.

Typically, sedition is considered a subversive act, and the overt acts that may be prosecutable under sedition laws vary from one legal code to another. Where the history of these legal codes has been traced, there is also a record of the change in the definition of the elements constituting sedition at certain points in history. This overview has served to develop a sociological definition of sedition as well, within the study of state persecution.

The difference between sedition and treason consists primarily in the subjective ultimate object of the violation to the public peace. Sedition does not consist of levying war against a government nor of adhering to its enemies, giving enemy’s aid, and giving enemies comfort. Nor does it consist, in most representative democracies, of peaceful protest against a government, nor of attempting to change the government by democratic means (such as direct democracy or constitutional convention).

Sedition is the stirring up of rebellion against the government in power. Treason is the violation of allegiance to one’s sovereign or state, giving aid to enemies, or levying war against one’s state. Sedition is encouraging one’s fellow citizens to rebel against their state, whereas treason is actually betraying one’s country by aiding and abetting another state. Sedition laws somewhat equate to terrorism and public order laws.”  http://en.wikipedia.org/wiki/Sedition

Please join us every Tuesday evening from 8-10 PM EST