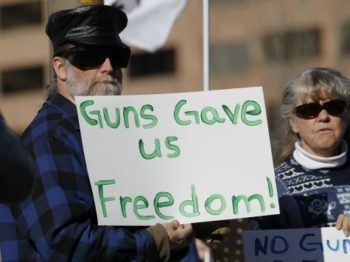 Sheriff Arpaio has done this since 1993, but this year the Maricopa County Sheriff’s Office (MCSO) stresses that “worldwide terror alerts and violent attacks” make the role of the posse even more important.

According to an MCSO press release, Sheriff Arpaio said:

“We have  to undertake and deal with these threats as an entire community in order to best safeguard the public. The first line of defense is of course law enforcement, and that includes the posse, which has proved itself again and again a most valuable and successful resource through the years.”

The volunteer posse can’t do it alone, so with nearly 250,000 Arizonans carrying concealed weapons, terrorists with evil intent entering large gatherings, including shopping malls, should be worried about armed citizens who will be ready to defend themselves and others.

Sheriff  Joe continued to clarify his motives by saying that  “I’m just talking about the areas where you have large crowds and someone pulls out the gun and starts shooting. Maybe somebody with a concealed weapon takes the guy down,” Arpaio said.

But there are some in law enforcement  and in general who are calling this a bad idea.

Steve Henry, chief deputy of the Pinal County Sheriff’s Office, said  “untrained gun owners could add to chaotic situations at big events, increasing the risk to innocent bystanders.”  And although this statement can be true, so is defending yourself with a concealed weapon if you find yourself in this position.

“Sometimes it’s not proper to pull the trigger because the collateral damage is not worth it,” Henry said. “We don’t want to walk into a gun fight between anybody, much less a gun fight where people are untrained.”

Arpaio’s comments came in  the wake of terrorist attacks in Paris, Beirut and Mali. Arizonan’s have a polarized view of the matter.  Arpaio questioned gun owners in a KPHO interview on December 2, 2015 asking the public a valid  question. 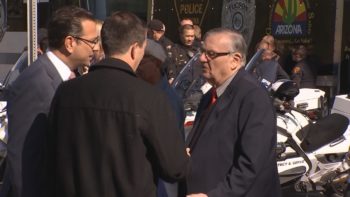 ” You have a gun. You carry that gun. Why? Why do you carry a concealed weapon?” -Sheriff Joe

Arpaio referred to the terrorist group ISIS, or ISIL, as a reason gun owners should be on the lookout. He also spoke about the Colorado man accused of killing three  people at the Planned Parenthood last week.

“Had someone been armed, the sheriff said, maybe he or she could have stopped the shooter. “

Here’s what readers had to say:

Scott Holmes of Arizona states: “Well, I’m not a fan of Joe but this only makes logical sense. I believe the vast majority of gun owners who would carry in public are competent enough to take a perp out. Yeah there will inevitably be a case where someone is wounded or killed by someone with good intentions but who’s to say that wouldn’t be better than letting the killer keep popping off rounds? There will always be collateral damage unfortunately.”

Danny Dickerson states: “One way to do away with any possible chaos would be to deputize those responsible citizens and give them a badge and license to prevent a crime. It would be the same principle as volunteer firemen and women. The only cost involved would be to train them how to handle a gun at a public event if a terrorist or criminal does decide to start something. That cost could be offset by the person being deputized paying a small monthly fee for the training. It’s not rocket science, and most law abiding gun owners would love to help defend the homeland. The second amendment does specifiy that the purpose for a gun is to have a militia i.e. citizens army to protect the land from enemies.”

Gene Fowler states: ” I carry for my protection and that of relatives, friends, and those around me. I would NOT stand there and let someone continue to shoot people. I wouldn’t recommend that to everyone who has a CCP, but after having law enforcement training and regular practice at a firing range, I feel I could make good decisions. I couldn’t be like Bruce, who I guess would run and hide, hoping he was lucky and lives to have Alzheimer’s.”