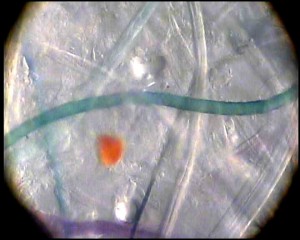 . Scientists claim that Humans do not have fibers that are blue or green, yet when they study the Morgellons patients, they are finding synthetic fibers of blue and green, & they don’t know what to think of it.

Finally The Ancient Aliens Team concluded that “We know from history that comets carry deadly life forms and bacteria foreign to earth. Could it be that Morgellons disease is another extraterrestrial bacteria that has infected humans?”

They ended by begging the question “Are extraterrestials preparing mankind for something big?”  Scary thought if you ask me. 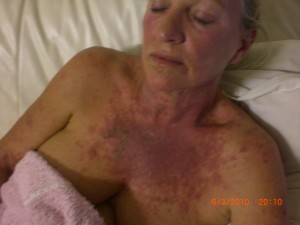 This photo is of Caroline Carter, Morgellons Sufferer and researcher.  She is in search of a cure for the disease, though the  UK (where Caroline once lived)  did not make that easy on her.

As she suffered through many Morgellons painful outbreaks (as seen in this photos), the medical association DENIED that Morgellons even existed, more less have a cure for it. Caroline then moved to Cyprus and began the study on her own.She has made astounding breakthroughs!

Please see our website under Morgellons or GMOD www.thetrtuhdenied.com for more information on her story.  Caroline will also be the featured guest on THE TRUTH DENIED TALK RADIO on  Friday , SEPTEMBER 16TH 12 pst . Caroline Carter has a lot of new information to share with the general public, so be sure to tune in.