Martin, (MartinHandDJ)
a longtime photographer of chemtrails in the UK, just released his video of chemtrails over the UK from 2011, with more links to UK and worldwide chemtrail activity and information. 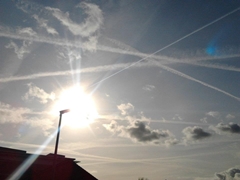 Do Google search on something like.
“regulation of Geoengineering Parliament PDF" it returns:
www.publications.parliament.uk/pa/cm200910/cmselect/cmsctech/221/221.pdf
Or…
“Unintended consequences of tropospheric aerosols”.
This is only brief, but it has some good information:
www.scribd.com/doc/45712430/The-Unintended-Consequences-of-Sulfate-Aerosols-in-the-Troposphere-and-Lower-Stratosphere
I found this about the rain:
www.guardian.co.uk/environment/2011/apr/14/hosepipe-ban-driest-march-60-years
The people responsible for geoengineering, this guy is good friends with Bill Gates:
www.guardian.co.uk/environment/2011/apr/14/hosepipe-ban-driest-march-60-years
Bill Gates likes to test things too:
blogs.discovermagazine.com/80beats/2010/05/10/bill-gates-funds-the-most-benign-form-of-geoengineering-ships-that-spray-seawater-to-seed-clouds/
Case Orange Scientific Study:
http://www.scribd.com/doc/45712614/Belfort-Group-Case-Orange
Atmospheric Aerosol Properties and Climate Impacts:
www.scribd.com/doc/45712460/Atmospheric-Aerosol-Properties-and-Climate-Impacts

(iii) Quiescent injection plumes
An otherwise passive (non-exhaust) injection system generally has limited turbulent energy, and mixing is controlled more decisively by local environmental conditions. If the quiescent plume is embedded within an aircraft wake, however, the turbulence created by the exhaust, and wing vortices created at the wingtips, can have a major impact on near-field mixing rates (e.g. Schumann et al. 1998). For a quiescent plume, we adopt a linear cross-sectional growth model that represents a small-scale turbulent mixing perpendicular to the plume axis (e.g. Justus & Mani 1979). Observations and theory lead to the following empirical representation for the plume volume:
rsta.royalsocietypublishing.org/content/366/1882/4007.full

2.1. Potential seeding material
An ideal ice nucleating agent for cirrus geoengineering would be one having a high
effectively (for ice nucleation) at temperatures colder than ∼−20◦C, but a very low
effectively at warmer temperatures. Bismuth tri-iodide (BiI3) had been investigated as an ice nucleant for weather
modification programs but was unsuitable because its effectively threshold was below −10◦C. However, this makes it a suitable ice nucleant for geoengineering, targeting primarily cirrus clouds and not the clouds normally targeted in cloud seeding experiments. In addition, BiI3 is non-toxic and reagent grade bismuth metal is about 1/12th the cost of silver, suggesting BiI3 would be about 1/12th the cost of AgI. Bismuth tri-iodide can be generated in aerosol form by combustion of an alcohol solution of BiI3 (solubility, 3.5 g/100 ml). A better aerosol generating system for this nucleant is pyrotechnic combustion. For this, a modest program of research and development would be required. A pressed composite mixture of BiI3, potassium perchlorate (KClO4), aluminum and gilsonite (a natural hydrocarbon) would be appropriate

2.2. Delivery mechanism
“Since commercial airliners routinely fly in the region where cold cirrus clouds exist, it is hoped that the seeding material could either be (1) dissolved or suspended in their jet fuel and later burned with the fuel to create seeding aerosol, or (2) injected into the hot engine exhaust, which should vaporize the seeding material, allowing it to condense as aerosol in the jet contrail. The objective would not be to seed specific cloud systems but rather to build up a background concentration of aerosol seeding material so that the air masses that cirrus will form in will contain the appropriate amount of seeding material to produce larger ice crystals. Since the residence time of seeding material might be on the order of 1–2 weeks, release rates of seeding material would need to account for this. With the delivery process already existing, this geoengineering approach may be less expensive than other proposed approaches”.

A special thanks to MartinHandDJ for sharing his research with TheTruthDenied.com
by permission and distribution 2011.