Robby Wells is a man with a plan – Could this be our next President?

Robby Wells  and Natalie Lencioni contacted  The Truth Denied’s and asked for a LIVE radio  interview.  We are honored to have met Robby to  conduct this excellent interview with him. Robby Wells is running for President in 2016and we plan on keeping track of his progress until election year. Robby is an optimist with a plan, as well he is one of us. He is a middle class citizen and  who has spent his entire life making a difference in his local community, which lead him to running for the President of the United States.

Enjoy the interview, and please , if you believe in what Robby Well’s has to say, contact him!

Robby Wells has been a public servant for over twenty years, serving as a teacher, football coach, and a member of the Army National Guard. Mr. Wells was adopted at birth, and grew up in the southeastern part of the country as the son of a Baptist Minister. He learned the value of hard work at a very young age when he delivered newspapers as a ten year old.

Robby Wells has also been recognized as one of the top young motivational speakers in America. He has been the keynote speaker for national conventions, school assemblies, and civic organizations around the country. Mr. Wells has also finished an autobiography that is scheduled to be published in 2012.

In 2006, Robby Wells joined the Army National Guard during the middle of the Wars in Afghanistan and Iraq. Mr. Wells joined the Army National Guard at the pinnacle of his coaching career at the age of 38. He had always advised his players that serving your country was the most honorable endeavor that a person could achieve, and he believed that he needed to lead by example. See more here: http://www.robbywells2016.com/about_robby 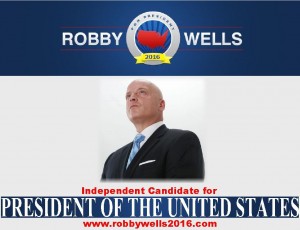 Please look into some of Robby’s proposals: 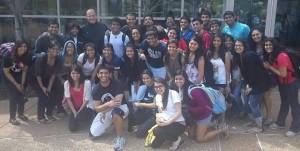 “My fellow Americans,
In the wake of the tragic events that have taken place in Aurora, Colorado and Newtown, Connecticut, it is time for every law abiding citizen to take action in order to secure the ones that we love. Elected officials in Washington for both parties have used these tragedies to scream for greater gun control, which will take away from every law abiding citizen’s Second Amendment right. These elected officials have used these tragedies to jockey for position in their next election. Enough is enough, and we can solve this problem very quickly by using common sense.

That is why today, I am introducing my plan called “Vets for Kids.” For a minimal cost, every school in the nation can employ armed Veterans to secure our children from psychopathic criminals that target schools because they are considered “No Weapon Zones.”

This is a common sense solution that will give parents the peace of mind of knowing that their children are safe at school. This solution will also give thousands of unemployed Veterans the opportunity to once again provide for their families. Who better to protect our children than our Veterans who served to protect every American while they actively served. This program, “Vets for Kids” should be adopted on the local and state level. Now is the time to secure our children, who are the future generation. 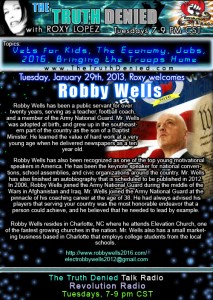 Please visit Robby’s website, or just give him a call today!  Robby  has not only offered to speak with American’s on the phone & email, but in person! If you wish for Mr. Wells to come to your town, simply schedule it with his Northwest Coordinator, Ms. Natalie Lencioni. Call  Phone# 704-606-2859, or Email Mr. Wells at  electrobbywells2012@gmail.com -or- Email Natalie Lencioni at natalie_s_renner@yahoo.com.

Please be sure to join Roxy Lopez every Tuesday night  8-10 p.m.( EST)

4 thoughts on “Robby Wells is a man with a plan – Could this be our next President?”