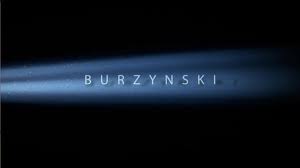 If there is one thing that I would like you to take away from this article and the full length version of the documentary about Doctor BURZYNSKI it would be this; CANCER is BIG BUSINESS. Pharma is in control via the almighty dollar and they do not want CURES. The FDA is paid off (public information and disclosure is available) to keep us on drugs that do nothing but aggravate our illnesses, and in some cases actually kill us. Question to ask yourselves is “When has the Food and Drug Administration ever cured a disease?” Do you have the answer yet?

I watched the following documentary more than once, and then I went down the proverbial ‘rabbit hole’, only to come out mad as hell. The documentary revealed some of what I have already known and had written about in past articles for our publication, but Bursynski’s story really spelled it out in real time. It starts back in the 1970’s, but it is ongoing , current news and currently being investigated.It is a story of a modern day Christ. And it is happening to us, right now! The public is being restricted, cut off , and misinformed about cures. The fact is, Cancer is a multi- trillion dollar industry, and if you cure cancer…big pharma dries up. This is truly one of the most IMPORTANT Documentaries of our time!

Cancer does not have to be a death sentence but the FDA doesn’t want you to know this!  Dr. Berzynski’s story sheds light on how the FDA will  go to ANY length to keep the public  in the dark about Dr. Bruzynski’s cure for cancer . Please share this film and the website links that have been provided! We must stop this out of control and corrupt administration (FDA) by means of awareness to the public and taking action. BRAVO to Dr. Bruzynski and those who created the documentary!

Please WATCH this riveting  DOCUMENTARY. PASS IT ON!

Burzynski, the Movie is an internationally award-winning documentary that tells the true story of a medical doctor and Ph.D biochemist named Dr. Stanislaw Burzynski who won the largest, and possibly the most convoluted and intriguing legal battle against the Food & Drug Administration in American history.

Above photo: His victorious battles with the United States government were centered around Dr. Burzynski’s gene-targeted cancer medicines he discovered in the 1970’s called Antineoplastons, which have currently completed Phase II FDA-supervised clinical trials in 2009 and has been given permission by the FDA to begin the final phase of FDA testing–randomized controlled clinical trials. Dr. Burzynski’s website, and yes he is still treating patients! http://www.burzynskiclinic.com

Above photo: The judge in the case basically said that he can treat anybody he wants in Texas, but he can’t ship his medicine in interstate commerce. The FDA viewed that as a failure, and told Dr. Burzynski’s attorneys at the time that “they have other ways to get him.”

Above photo: Let’s talk about the other ways. In 1985, the FDA convened a grand jury to hear evidence to try to indict Dr. Burzynski. In connection with that, they had a raid of his clinic where they seized 200,000 pieces of paper, including all of his medical records of all patients.

“It’s a little difficult to practice medicine when you don’t have medical records.” ~ Dr. Burzynski

When Antineoplastons are approved, it will mark the first time in history a single scientist, not a pharmaceutical company, will hold the exclusive patent and distribution rights on a paradigm-shifting medical breakthrough. http://www.burzynskimovie.com/

Please WATCH this riveting  FREE DOCUMENTARY. PASS IT ON!

Now that you have watched the documentary, will you help to spread the word?

ABOUT THE MAKER of the film Berzynski:

“When director and producer Eric Merola set out to make this film, his initial intention was to explore for himself the remarkable stories of countless patients who have claimed to have been cured of what was once a terminal cancer diagnosis. Particularly since most of these patients had never undergone any “traditional”  treatments before starting Dr. Burzynski’s treatment, Mr. Merola felt it was a story that is both topical and of invaluable importance.

Eric spent months traveling the United States interviewing various cancer survivors who were treated by Dr. Burzynski. After obtaining these on-camera interviews, Eric was granted permission from both the patients and the Burzynski Clinic to publish all original medical records confirming diagnosis and recovery of these survivors. Eric Merola was granted  written permission to publicly exhibit these medical records in the film and supporting website.” http://www.burzynskimovie.com/ 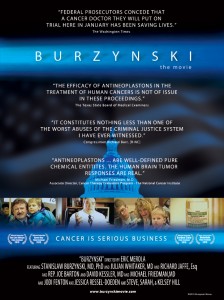 “Stanislaw R. Burzynski, M.D., Ph.D., internationally recognized physician and biochemist-researcher who pioneered the development and use of biologically active peptides in diagnosing, preventing and treating cancer, since 1967.

In 1967, at the young age of 24, S.R. Burzynski graduated from the Medical Academy in Lublin, Poland, with aM.D. degree with distinction, finishing first in his class of 250. During the same year he identified naturally occurring peptides in the human body which he concluded control cancer growth. He found that there is a marked deficiency of these peptides in cancer patients.

The following year, 1968, he earned his Ph.D. in Biochemistry as one of the youngest candidates in Poland ever to hold both an M.D. and Ph.D.

From 1970 to 1977, while a researcher and Assistant Professor at Baylor College of Medicine in Houston, his research was sponsored and partially funded by the National Cancer Institute. At Baylor, he authored and co-authored 16 publications, including 5 concerning his research on peptides and their effect on human cancer. Four of these publications were also co-authored by other doctors associated with M.D. Anderson Hospital and Tumor Institute, and Baylor College of Medicine.

In May of 1977, Dr. Burzynski received a Certificate of Appreciation from Baylor College of Medicine, commending him for completing five years of dedicated service and acknowledging his contributions made to the “Advancement of Medical Education, Research, and Health Care.”

Dr. Burzynski is the author and co-author of over 300 scientific publications and presentations. In his career he has received numerous prestigious awards from various medical, educational and governmental institutions. Currently, he holds 242 patents registered in 35 countries, related to 17 proprietary scientific inventions (as of January 2011).

Sources and photo credits go to the following:

About Burzynski, The Movie

“’Burzynski’ is the story of a medical doctor and Ph.D. biochemist named Dr. Stanislaw Burzynski who won the largest and possibly most intriguing legal battle against the Food and Drug Administration in American history.

His victorious battles with the United States government were centered around Dr. Burzynski’s belief in and commitment to his gene-targeted cancer medicines he discovered in the 1970’s called Antineoplastons, which have recently completed Phase II FDA-supervised clinical trials in 2009 and will begin the final phase of testing in 2011 – barring the ability to raise the required $150 million to fund them.

When Antineoplastons are approved, it will mark the first time in history a single scientist, not a pharmaceutical company, will hold the exclusive patent and distribution rights on a paradigm-shifting medical breakthrough.

Antineoplastons are responsible for curing some of the most incurable forms of terminal cancer. Various cancer survivors are presented in the documentary that chose his treatment instead of surgery, chemotherapy or radiation – with full disclosure of original medical records to support their diagnosis and recovery.One form of cancer, ‘Brainstem Glioma’ has never before been cured in any experimental clinical trial in the history of medicine. Antineoplastons holds the first cure in history (curing dozens of them).’Burzynski’ takes the audience through the treacherous, yet victorious, 14-year journey both Dr. Burzynski and his patients have had to endure in order to obtain FDA-approved clinical trials of Antineoplastons.However, what was revealed a few years after Dr. Burzynski won his freedom and gained FDA-authorized clinical trials, helps to paint a more coherent picture regarding the motivation of the U.S. government’s relentless prosecution of Stanislaw Burzysnki, M.D., Ph.D.”

QUESTION: “When has the Food and Drug Administration ever approved  a drug  or therapy that has  cured a disease?” Do you have the answer yet?

ANSWER: The answer is NEVER

Update: Dr. Bruzynski has WON the case against the FDA in 2013!