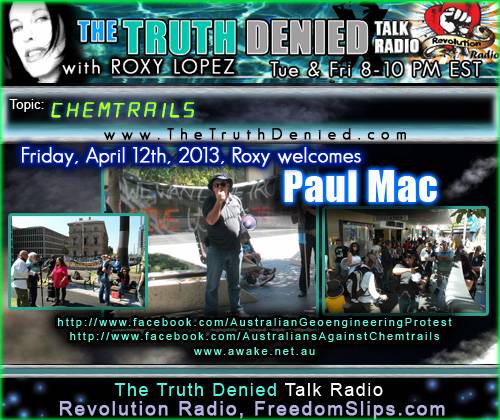 Climate Change supported by climate sciences have lead to the global warming hoax.

Our guest, Paul Mac sets the record straight and talks about activism as a means to an end for Geoengineering programs. He works toward unifying global activist groups in an effort to unify the world, he also feels that  the planet and life as we know it is in great danger from an extinction level event. This is quite alarming.

The first thing that Paul pointed out on the show tonight was the propaganda machine, and  in some cases how  science and mainstream media work in conjunction with each other to feed the public outright lies in connection to Global Warming or better known as Climate Change. Paul does not enter into a discussion if he has not done the research, and he states this clearly on the radio program. Instead , he prefers to focus on gathering groups if individuals together under one common goal, that goal being to educate the public on the  Geoengineering of our planet, the effects it has on all living things,  and BAN the programs! His intention is clear, and he is mindful of all of his obstacles, such as shills and trolls that Paul said only serve to “distract activists from their goals.” Many of the listeners thought Paul and very sound advice for them and thanked him for his efforts..

During our interview , Paul mentioned a woman activist who was doing an on camera interview about chemtrails, when suddenly at the very end of the presentation, a chemtrail flew into the frame , of course proving Kelly’s point! Check out the interview here http://www.youtube.com/watch?v=9NNgKVz-fRw&feature=youtu.be

So if you think activism doesn’t work, think again!  Paul Mac  is out there in the streets, meeting his community, educating those who are willing to spend a few moments with him, opening there minds to the one fact that is on the table: Geoengineering is a global experiment on all living things, including you and I. WE THE CITIZENS of the planet never authorized this abuse,  and it’s time we demand a disclosure, a universal  BAN,  and hold those in charge accountable!

Please listen to this inspiring program in it’s entirety! (Please see below for all if Paul Mac’s contact information and join him in the movement if you are tired of seeing white grids in your skies.)

A 46 year old New Zealander living in Melbourne Australia, I have a background in Construction and currently work as a Project Manager for a large construction company.

I was awakened in 2001 to the global situation regarding Agenda 21 and the NWO and have spent the last few years seeing just how deep the rabbit hole goes. Twelve months ago I became increasingly concerned about growing Geo-Engineering trends and the lack of Activism taking place to bring accountability to the situation.

I strongly believe that unless action is taken now to bring a ban/moratorium into place to halt Geo-Engineering and Stratospheric Aerosol spraying aka Chemtrails, that the planet and life as we know it is in great danger from extinction level event. The madness of a handful of evil men and women must be stopped and it is up to you and me to call these people to account.

In partnership with some fellow Australians & New Zealanders we have worked hard over the last 12 months to bring together a national/international network of like-minded people who are documenting and collating the growing body of evidence in regards to Chemtrails, as well as forming a growing international protest movement to bring awareness to the public arena.

Want assistance in connecting with people in your area to form a protest group?