Michael Murphy has been working with the Mayor and the citizens on the island of Maui in Hawaii. With rain water tests and toxicity concerns, Michael Murphy has now made a considerable breakthrough with The Blue Sky Ordinance. Michael has this to say regarding data and progress:

The American Association for Aerosol Research Conference Provides More Clues About Chemtrail/Geoengineering Programs
“Could the agenda behind chemtrail/geoengineering programs be more than what geoengineers are admitting?

As awareness of these damaging programs increases around the world, theories about them include weather control, population control, morgellons disease, food control, etc. On October 3-7, 2011, scientists from around the world gathered in Orlando, Florida for the American Association for Aerosol Research (AAAR) conference.

The lectures at this conference included; “Air Quality Modeling”, “Health Disparities”, “Ambient Air Particle Pollution”, and an area of particular interest to many who are aware of the chemtrail/geoengineering issue, “Aerosols, Clouds and Precipitation”.

While geoengineering was not the main focus of the event, some of the lectures provided vital clues as to what some of the true agendas of these damaging programs might be.”

“What would you say if you were told that airplanes were regularly spraying toxic aerosols in the skies above every major region of the world? That is exactly what a group of protestors were claiming outside of the annual American Association for the Advancement of Science (AAAS) meeting that was held in San Diego from February 18-22. However, inside the convention center was a different story. The scientists gathered to discuss the “plausibility” of implementing various Geo-engineering campaigns throughout the world, all under the guise that the Earth has a man-made global warming problem that can be solved in-part by spraying aerosol aluminum and other particles into the sky to block the sun. When these scientists were asked about the possibility of existing aerosol programs; they stated that no aerosol spraying programs have been implemented to date. A little confused? Why would protestors gather outside of a meeting making claims that world-wide aerosol programs were under way if scientist were only now discussing the possibility of implementing these programs? Could it be that one of these groups is being deceived?”

Also on his video:


What in the World Are They Spraying? 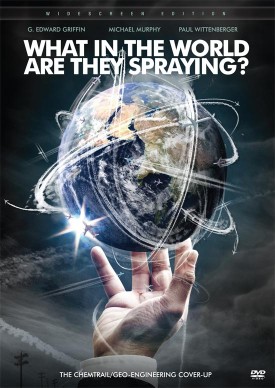