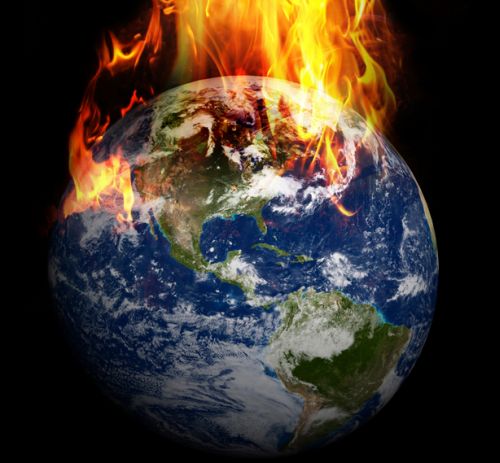 Whenever extreme weather happen, they use it to ask people to be more aware and willing to do something for global warming.

http://www.nature.com/nature/journal/v470/n7334/full/nature09762.html
The precise magnitude of the anthropogenic contribution remains uncertain, but in nine out of ten cases our model results indicate that twentieth-century anthropogenic greenhouse gas emissions increased the risk of floods occurring in England and Wales in autumn 2000 by more than 20%, and in two out of three cases by more than 90%.

http://thinkprogress.org/climate/2011/01/20/207369/lester-brown-extreme-weather-climate-change-record-food-prices/
“Climate change is already contributing to the extreme weather (and local water shortages) that are helping to drive up food prices.”

http://blog.algore.com/2011/02/two_important_papers.html
“Scientists have predicted for decades that human-caused global warming would increased extreme weather events that cause severe harm to humans, property, and the environment. These two studies are but the latest in a growing body of scientific literature demonstrating that these predictions are coming true now.”

“They should help lay to rest the myth that human-caused global warming will contribute to grievous harm only in some far-off future. They also strongly support the view that the human-induced increases in greenhouse gases have contributed to the devastating extreme events that hit Australia and other parts of the world in the past several months, helping to drive up food prices.”

http://www.washingtonpost.com/blogs/capital-weather-gang/post/top-climate-change-stories-of-2011/2012/01/02/gIQAHyHuaP_blog.html
For Earth’s climate system, 2011 was an extraordinarily turbulent year. The United States saw a series of record-busting extremes, from a devastating tornado season to an epic drought in a vital agricultural region. The fusillade of extreme events kept global warming in the public conversation even as it slipped to the bottom of the public’s list of concerns in the face of a grim economy, and as “climate” became a four-letter word in Washington.

http://blog.algore.com/2011/02/an_answer_for_bill.html
“In fact, scientists have been warning for at least two decades that global warming could make snowstorms more severe. Snow has two simple ingredients: cold and moisture. Warmer air collects moisture like a sponge until it hits a patch of cold air. When temperatures dip below freezing, a lot of moisture creates a lot of snow.”

“A rise in global temperature can create all sorts of havoc, ranging from hotter dry spells to colder winters, along with increasingly violent storms, flooding, forest fires and loss of endangered species.”

http://blog.algore.com/2009/04/testimony.html
-This year, a number of groups ranging from the National Audubon Society to the Department of Interior, released the U.S. State of the Birds report showing that nearly a third of the nation’s 800 bird species are endangered, threatened or in significant decline due to habitat loss, invasive species and other threats including climate change. The major shift attributed to the climate crisis related to the migratory patterns and a large shift northward among a vast range of bird species in the U.S.

-Some of the most intriguing new research is in the area of extreme weather events and rainfall. A recent study by German scientists published in Climatic Change projects that extreme precipitation will increase significantly in regions that are already experiencing extreme rainfall. Man-made global warming has already increased the moisture content of the air worldwide, causing bigger downpours. Each additional degree of temperature increase causes another seven percent increase in moisture in the air, and even larger downpours when storm conditions trigger heavy rains and snows.

http://blog.algore.com/2011/01/abc_news_makes_the_link.html
In a report on flooding in Australia and Brazil, ABC News makes the link between these natural disasters and the climate crisis. As the earth warms, scientists tell us that we will see more and more extreme weather conditions. Each of these occurrences further underscore why we need to take immediate action to solve the climate crisis.

However, is it really true that extreme weather happening all over the world? Because if it is a global event then no place is safe from climate change.

http://blog.algore.com/2011/11/ap_reports_science_panel_get_r.html
“The panel said the world needs to get ready for more dangerous and “unprecedented extreme weather” caused by global warming. These experts fear that without preparedness, crazy weather extremes may overwhelm some locations, making some places unlivable.”

A global event require that all place in the surface of the earth to suffer the same fate. However I know at least one place that do not suffer extreme weather. Surabaya do not experience drought, nor flood, nor tornadoes this year. The lightning also reduce a lot compared to two years ago.

If your place also do not suffer from extreme weather, please let me know.