The violent energy of the earth changes  can sometimes be  predicted, like hurricanes and tornados . Though residents and homeowners admit to  noticing a slight erosion in their back yards, they certainly were not prepared for what occurred on Wednesday morning! The huge landslide that struck early Wednesday morning on Whidbey Island,  has destroyed one home and more than a dozen others cut off from access by road,: it  sent the equivalent of 40,000 dump-truck loads of earth — about 200,000 cubic yards — heaving toward Puget Sound. A road was shifted about 80 feet vertically and to the west. A forest at the top of a cliff was pummeled to splinters on the beach.

The NY Times reported on Wednesday :

“Scientists at the Washington State Department of Natural Resources said Thursday in a report that unlike, say, an ordinary mudslide or avalanche — both of which have seasonal or environmental triggers, especially around precipitation — the  Whidbey slide was considered “deep-seated.” That means, the report said, that the earth on Whidbey Island has in fact been moving slowly for years — since at least 2002 — as part of a larger “landslide complex” that may date back as far as 11,000 years.”

“Once an area slides, it will try to stabilize itself. The land will slowly move in an attempt to do this. The chance of another catastrophic movement is low; but possible.”

The first priority is stabilizing the land, he said, adding that although smaller slides continue, steps in that direction have begun, he said.

For example, there is now a gravel path replacing a road that was lost. The pathway allows people to go back to their homes — 18 remained isolated — to pick up valuables and possessions.

So far, the toll includes one house destroyed after the slide hit at about 4 a.m. Wednesday. Four houses have been yellow-tagged, meaning there is danger and habitability of structures is limited. In all, about 20 properties were damaged, including some where backyards fell down or where debris from the slide needs to be cleaned up, Brooks said.

All of the isolated properties have water, and officials are working on restoring power to all of them, he said.

Geologists are still searching for the immediate cause of the slide, but the area is known for smaller slides. Wednesday’s slide was far from the first, and likely not the last.

However, the latest one was massive, dropping enough earth to fill dozens of football stadiums, and even raising the beach about 30 feet above the earlier shoreline. The front of the slide is more than 1,000 feet long and extends some 300 feet into the sound.

No damage estimate was immediately available. Most of the homes on the island are summer or weekend getaways, but there is a permanent community as well.

Taking care of the displaced hasn’t been a problem, Brooks said: There is an active American Red Cross effort, restaurants have been offering meals and some cottages have taken in evacuees.

BEFORE & AFTER THE LANDSLIDE: 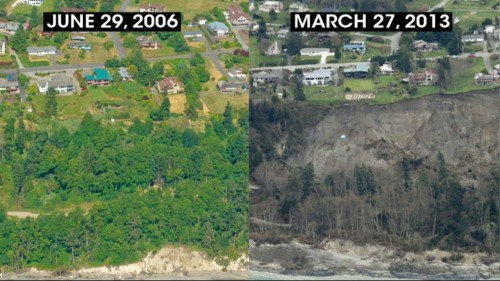 Twenty properties on a scenic island hillside were damaged by the slide, with some suffering structural damage and others losing portions of their yards. 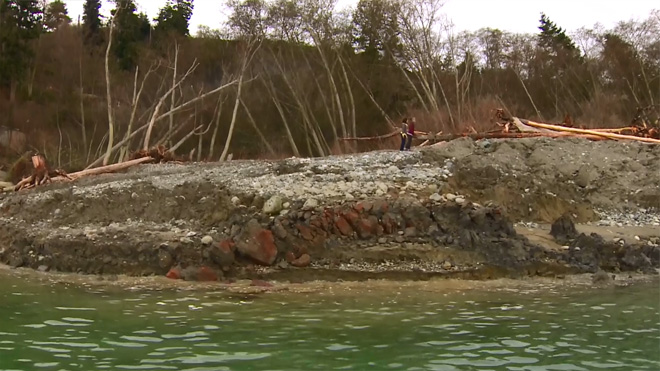 LARGER PHOTO OF BEFORE AND AFTER: