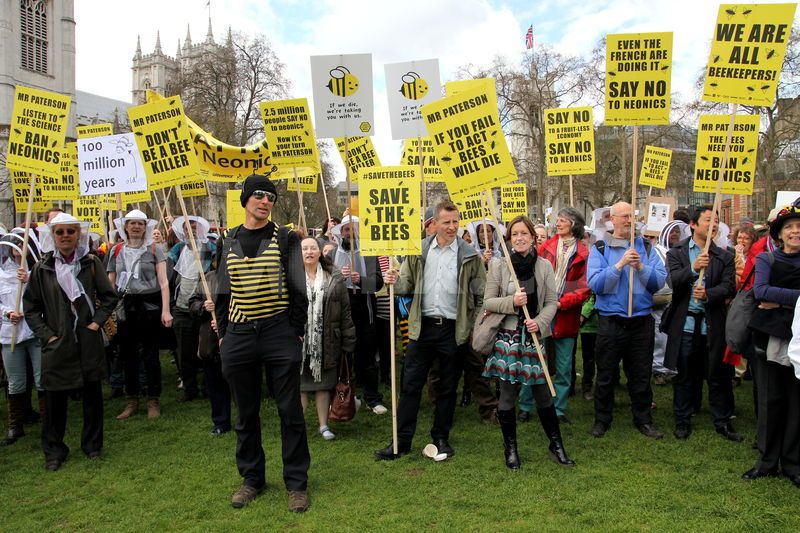 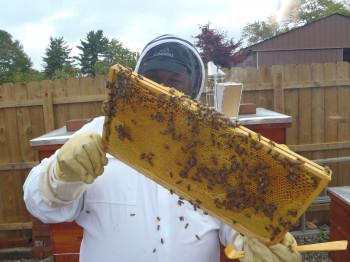 Neonicotinoids as of 2-15-2015 are LEGAL in America. They are killing our pollinators all over the world  (bees).

The proof is in and  folks, it’s not pretty. From 2012 to 2013 nearly 80% of bees are either not returning to there hives, or they have simply died. The reports are coming in from beekeepers and polinaters all over the country,  that the Bees are dying off at alarming rates.On July 12, 2013, Rep. John Conyers, on behalf of himself and Rep. Earl Blumenauer, introduced the “Save American Pollinators Act” in the House of Representatives. The Act called for suspension of the use of four neonicotinoids, including the three recently suspended by the European Union, until their review is complete, and for a joint Interior Department and EPA study of bee populations and the possible reasons for their decline. The bill was assigned to a congressional committee on July 16, 2013 and did not leave committee.

“A conclusive explanation so far has escaped scientists studying the ailment, colony collapse disorder, since it first surfaced around 2005. But beekeepers and some researchers say there is growing evidence that a powerful new class of pesticides  known as neonicotinoids, incorporated into the plants themselves, could be an important factor.

The pesticide industry disputes that. But its representatives also say they are open to further studies to clarify what, if anything, is happening.

“They looked so healthy last spring,” said Bill Dahle, 50, who owns Big Sky Honey in Fairview, Mont. “We were so proud of them. Then, about the first of September, they started to fall on their face, to die like crazy. We’ve been doing this 30 years, and we’ve never experienced this kind of loss before.”

In a show of concern, the Environmental Protection Agency recently sent its acting assistant administrator for chemical safety and two top chemical experts here, to the San Joaquin Valley of California, for discussions.

In the valley, where 1.6 million hives of bees just finished pollinating an endless expanse of almond groves, commercial beekeepers who only recently were losing a third of their bees to the disorder say the past year has brought far greater losses.

The federal Agriculture  Department is to issue its own assessment in May. But in an interview, the research leader at its Beltsville, Md.,  bee research laboratory, Jeff Pettis, said he was confident that the death rate would be “much higher than it’s ever been.”

Clothianidin and Honey Bees:  Clothianidin is one of two neonicotinoids that is used on almost all corn planted in the United States (the other is thiamethoxam, which turns into clothianidin  when honeybees metabolize it). This is significant as corn is the “single largest use of arable land in North America.” It takes only 22 to 44 nanograms (billionths of a gram) to kill 50% of honeybees exposed. However, when administered to the bees orally, a mere 2.8 to 3.7 nanograms is sufficient to kill 50% of honeybees. One kernel of corn can contain enough clothianidin to kill 80,000 honeybees. While corn does not rely on honeybees for pollination (it uses wind), corn pollen is a significant food source for honeybees.   Source:  Sourcewatch.org.

What seems to be alarming is that it is not only the bees are vanishing but the list of assaults on the environment via nicotine-like chemicals called neonicotinoids  now includes birds.

Read the impact study on birds  here: Independent scientists have assessed the effects of clothianidin and thiamethoxam on honey bee colony health and development, examining both sub-lethal exposure effects and acute risks. Scientists have also identified massive data gaps that prevent accurate assessments as to their continued safety, not just for honey bees but for ecosystem integrity on the whole.  A major new report issued this week by the American Bird Conservancy, The Impact of the Nation’s Most Widely Used Insecticides on Birds, sounds dire warnings about EPA’s failures to assess threats to birds and to the aquatic ecosystems many species depend upon.

Neonicotinoids are a new class of insecticides chemically related to nicotine. The name literally means “new nicotine-like insecticides”.  Like nicotine, the neonicotinoids act on certain kinds of receptors in the nerve synapse.  They are much more toxic to invertebrates, like insects, than they are to mammals, birds and other higher organisms.

One thing that has made neonicotinoid insecticides popular in pest control is their water solubility, which allows them to be applied to soil and be taken up by plants.  Soil insecticide applications reduce the risks for insecticide drift from the target site, and for at least some beneficial insects on plants.

The Importance of bees

“The most recognized pollinators are the various species of bees, which are plainly adapted to pollination. Bees typically are fuzzy and carry an electrostatic charge. Both features help pollen grains adhere to their bodies, but they also have specialized pollen-carrying structures; in most bees, this takes the form of a structure known as the scopa, which is on the hind legs of most bees, and/or the lower abdomen (e.g., of megachilid bees), made up of thick, plumose setae. Honey bees, bumblebees, and their relatives do not have a scopa, but the hind leg is modified into a structure called the corbicula (also known as the “pollen basket“). Most bees gather nectar, a concentrated energy source, and pollen, which is high protein food, to nurture their young, and inadvertently transfer some among the flowers as they are working. Euglossine bees pollinate orchids, but these are male bees collecting floral scents rather than females gathering nectar or pollen. Female orchid bees act as pollinators, but of flowers other than orchids. Eusocial bees such as honey bees need an abundant and steady source of pollen to multiply.”

Europe has been so contaminated that another one of their agencies, Department for Environment Food and Rural Affairs, DEFRA, tried to conduct an experiment and they found that their control colonies were as contaminated with Clothianidin as their test colonies were. They couldn’t find a place in the United Kingdom that had not been contaminated with the (neonicotinoid) pesticides in question! That’s what we’re dealing with.

It could take decades for the soils to relieve themselves of these chemicals. It may already be too late. These are crimes against the environment. And they knew going in! They knew twenty years ago what these (nicotine) chemicals were going to do!

THE VERY FACT THAT THE EPA –  HEARING ALL THE CRITICISMS FROM HONEY BEE FARMERS AND OTHERS FOR NEARLY A DECADE AND RESISTS DOING ANYTHING TO CHANGE THEIR POLICIES. IN FACT, EPA HAS GIVEN MORE CONDITIONAL REGISTRATIONS FOR MORE POISONS.

IF THE GOVERNING AUTHORITY IS NOT TAKING ANY OF THIS SERIOUSLY, WHAT IS TRULY THE WORST CASE PROJECTION FOR, LET’S SAY, ANOTHER DECADE?

The wind-pollinated crops will continue – rice, corn, soybeans – things like that. But the world will be impoverished. We simply can’t let that happen. Ultimately the EPA reports to Congress and Congress has done virtually nothing. Why isn’t Congress getting into the driver’s seat here?

WHEN YOU GET TOGETHER WITH SOME OF YOUR COLLEAGUES AT BEYOND PESTICIDES AND MANY OF THE OTHER APIARY ORGANIZATIONS, WHAT DO YOU HONESTLY TALK ABOUT WITH EACH OTHER ON THAT VERY QUESTION: WHY AT THE HIGHER AUTHORITIES OF AGENCIES IN THIS ADMINISTRATION THAT THERE IS TOTAL DISREGARD FOR THE POISONS THAT ARE OVERWHELMING THE UNITED STATES FARM LAND?http://www.earthfiles.com

Lawsuit ensues against the EPA

LOOKING FORWARD THE NEXT FEW MONTHS TO THE END OF 2013, IS THERE ANY LAWSUIT, ANY OTHER ACTION THAT BEYOND PESTICIDESAND ALL THE VARIOUS ENVIRONMENTAL GROUPS AND YOU AS HONEY BEEKEEPERS ARE GOING TO TRY TO DO?

Well, we filed the lawsuit against the EPA on the 21st of March 2013. It’s an administrative lawsuit. It does not call for damages, but what it asks is that the court find that the EPA has not been following the law. It’s been characterized in the media as we have called for a ban on these insecticides. That’s not the thrust of that March 21st lawsuit. That lawsuit asks the court to find the EPA has not followed the law and has abused the category of  ‘conditional registration.’ Now that might resolve in the withdrawal of some of these products from the market. But what we’re calling for is for the court to hold EPA accountable under the law.http://www.earthfiles.com

Today, a year after groups formally petitioned the U.S. Environmental Protection Agency (EPA), four beekeepers and five environmental and consumer groups filed a lawsuit in Federal District Court against the agency for its failure to protect pollinators from dangerous pesticides.  The coalition, represented by attorneys for the Center for Food Safety (CFS), seeks suspension of the registrations of insecticides that have repeatedly been identified as highly toxic to honey bees, clear causes of major bee kills and significant contributors to the devastating ongoing mortality of bees known as colony collapse disorder (CCD).  The suit challenges EPA’s ongoing handling of the pesticides as well as the agency’s practice of “conditional registration” and labeling deficiencies.

“America’s beekeepers cannot survive for long with the toxic environment EPA has supported. Bee-toxic pesticides in dozens of widely used products, on top of many other stresses our industry faces, are killing our bees and threatening our livelihoods,” said plaintiff Steve Ellis, a Minnesota and California beekeeper. “Our country depends on bees for crop pollination and honey production.  It’s time for EPA to recognize the value of bees to our food system and agricultural economy.”

The pesticides involved — clothianidin and thiamethoxam — are “neonicotinoids,” a newer class of systemic insecticides that are absorbed by plants and transported throughout the plant’s vascular tissue, making the plant potentially toxic to insects.  Clothianidin and thiamethoxam first came into heavy use in the mid-2000s, at the same time beekeepers started observing widespread cases of colony loses, leaving beekeepers unable to recoup their losses.

“Beekeepers and environmental and consumer groups have demonstrated time and time again over the last several years that EPA needs to protect bees.  The agency has refused, so we’ve been compelled to sue,” said Center for Food Safety attorney, Peter T. Jenkins.  “EPA’s unlawful actions should convince the Court to suspend the approvals for clothianidin and thiamethoxam products until those violations are resolved.”http://www.panna.org/press-release/beekeepers-and-public-interest-groups-sue-epa-over-bee-toxic-pesticides

Pesticide Action Network (PAN) is “an international coalition of around 600 NGOs, citizens’ groups, and individuals in about 60 countries.” PAN is involved in fighting problems caused by pesticide use, and advocates ecologically sound alternatives. Branches include PAN North America, U. K., Germany, Mexico, Asia and Pacific, and Africa.

In November 2010, PAN publicized a leaked Environmental Protection Agency (EPA) memo that showed that the EPA suspected the crop spray clothianidin, manufactured by German agrochemical company Bayer, as a possible cause of bee colony collapse disorder.[2] This pesticide has a conditional approval in the U. S., where it is widely used on sugar beets, canola, soy, sunflowers, wheat, and corn, but is banned in Germany, France, Italy, and some other countries.

In December 2010, PAN North America joined with other organizations in suing California, to challenge “the state’s approval of the cancer-causing strawberry pesticide methyl iodide.”