PLANE CRASH in ARIZONA : Mysterious findings as public is shut out from the truth!

UPDATE:  The Truth Denied has been following the investigation on the  Plane Crash that claimed the lives of three local (adult) residents and three children on the eve of  Thanksgiving. The Truth Denied Team extends prayers to all of the families and there loved ones. 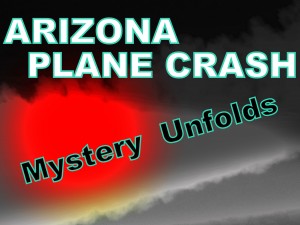 11:23:2011 Our original report included breaking news coverage and you can review it here:

Across the nation, Mainstream Media   and various Arizona tabloids, have been piecing together the incident and clearly something   doesn’t add up.  In other words the story is changing daily, and I just have to go back to the initial eye witness reports from citizens in the Superstition Mountain area, along with   private surveillance cameras that captured the plane crash.

The Eastern Arizona Courier reports  “Pilot Shawn Perry, 39, of Safford originally planned to drive to Mesa to pick up his three children, Morgan, 9, Logan, 8, and Luke, 6, but his boss, Ponderosa Aviation co-owner Russell Hardy, 31, of Thatcher, allegedly convinced him it would be faster and more fun to fly over. Avionics technician Joseph Hardwick, 22, of Safford was invited to tag along for the ride.

The children lived with their mother, Karen Perry of Gold Canyon in Apache Junction, who is also a pilot and works as a flight attendant for Delta Airlines. Karen was described by friends as a caring mother who did her best to look after her children, who had struggles of their own. Morgan previously underwent multiple brain surgeries relating to her epilepsy, and Luke had autism.”

The courier goes on to say that “In released 9-1-1 calls, witnesses report seeing the plane flying level straight into the mountain as if the pilot didn’t realize he wasn’t high enough to clear it.”

Many have questioned why Hardy, if he was indeed piloting the craft, would be flying at such a low altitude in an area where the mountains reach 5,057 feet at its tallest peak.”

Of course the argument is whether the Metro Airspace Laws and regulations need to be changed.

That is just a distraction.

The tribune reports that “James Timm, executive director of the Arizona Pilots Association, said the pilot may have been flying at that altitude due to a redesigned airspace on the far eastern edge of metro Phoenix by the Federal Aviation Administration to separate commercial jetliners from general-aviation aircraft. A commercial aircraft was seen in the area along with the Ponderosa plane just prior to the crash.
Timm said he questioned the change in 2006 because it effectively put the floor altitude for commercial traffic at about the same height of the Superstition Mountain’s tallest peak. That means planes traveling east from Falcon Field, as was the case with the Ponderosa plane, either have to go around the mountains or request permission to enter commercial airspace to fly above it. General aviation pilots can request clearance from control towers to enter commercial airspace, but pilots on visual flight rules are responsible for seeing obstacles.

Here is where it starts to get really interesting:

Pinal County Today disclosed that Pinal County court records indicate that the 39 year old pilot Perry allegedly grounded himself from his job as a pilot for Safford, Arizona-based Ponderosa Aviation, Inc. due to severe depression in 2010.

“Perry had also filed for bankruptcy last year after he and his wife Karen previously underwent wage garnishment from their jobs as a pilot and flight attendant for Delta Airlines.”

Is Pinal County Today implying suicide?  Why throw the pilot under the bus, especially because investigative teams on the scene have already released statements implying that it is currently unknown as to who was flying the plane that evening.

Their story does mention that Perry was in fact suicidal and in the middle of a nasty divorce. He apparently had filed for bankruptcy in 2010.  Prior reports cannot determine whether Perry was even flying the plane that fatal evening, as a matter of fact, reporters claim Perry was in the back seat playing with his children at the time of the crash and that Russell Hardy, 31, was piloting the craft.  Several tabloids claim that  Russell Hardy, along with his brother, Mikel Hardy, ran Ponderosa Aviation and was the FBO of the Safford Regional Airport.

Read the rest of the story here: http://www.goldcanyontoday.com/index.php?option=com_content&task=view&id=2023&Itemid=189

And what about the company who owned the Rockwell AeroCommander 690? What exactly is there line of business?

Early breaking news reports stated the plane was a twin-engine Rockwell Aero Commander 690, used for firefighting.  Yet another report claimed that the plane was used for surveillance.

Here is the company listing on the internet:

Ponderosa Aviation, Inc. in Safford, AZ is a private company categorized under Air Passenger Carriers, Nonscheduled. Our records show it was established in 2001 and incorporated in Arizona. Current estimates show this company has annual revenue of $1,200,000 and employs a staff of approximately 10.

Public records indicate that the classification of the company is:

*Note that Ponderosa Aviation does not have a known website of its own, and the local company profile prohibits the general public from viewing its’ annual Sales as well as SIC Code. (That is unless you are willing to surrender all of your contact information to the company.)

Here is a video of the actual crash, you be the judge:

Take a look at the comments beneath the video, it gets even more interesting. Check it out!

« Some witnesses told Phoenix-area television stations they heard a plane trying to rev its engines to climb higher before apparently hitting the mountains. The elevation is about 5,000 feet at the Superstition Mountains’ highest point »

A Predator Drone following COINCIDENTALLY THE SAME FLIGHT PATH could launch an ‘Infrared Guided Missile’ on the twin-engine plane. With one engine, the plane couldn’t climb higher before APPARENTLY hitting the mountain.

Around ~0:37, from the left behind the moving plane-dot, we can see a dim flash of light…

Around ~0:41, we can see the first burst of light (‘hit’) (the plane’s lights amplify and quickly diminish to normal flashing), then, the plane lights turn off…

Then, a huge explosion confirms the crash around ~0:51…

Please refer to the video, there are more comments that the reader should not only find valid, but let’s remember , there is an important time-line on this story, and we broke it first on the internet, we were here from the start!

We will continue to investigate this story further. If you have more information on Ponderosa Aviation Inc.  please feel free to contact us at info@thetruthdenied.com  subject line:  Plane Crash Arizona

Written by The Truth Denied

3 thoughts on “PLANE CRASH in ARIZONA : Mysterious findings as public is shut out from the truth!”