If Humanity KNEW what was to come, how would we react? What if it turned out to be a catastrophic event such as Polar Shift? Would you quit your job? Would you panic and close all your bank accounts? What would you do if you suddenly discovered evidence to support that the Mayan and Hopi Prophecies were correct?  We set out to look at the evidence. Welcome our guest today Howard Stein.

The last time Howard came on our show, he blew up the airwaves and that radio show is still going viral, so to speak. Howard returns to The Truth Denied Talk Radio to update us on the end of the Mayan Calendar , The coming Polar Shift, and why he feels that the US Military is Gearing up for something, and the possibility of a coming Polar Shift. Howard is a VP and DJ at http://allhits7890radio.com/

“Take the time to do your homework, and surely you will have some answers to prepare yourselves for the inevitable.”

Howard has studied the signs for quite sometime, although he does make it clear when he states “I hope that I am wrong!” Again do your homework!

Howard warned the public not to buy into the thousands of dollars’ worth of junk sold on the internet to help you to prepare for the coming months. He willingly provided the following:

Medical Supplies (He suggested bandages and antibiotics in case of injury)

**I would add a dependable vehicle as well as stored gasoline, along with warm blankets and coats to survive in the cold. Remember it will be winter in December, and above the 35 parallel there is sure to more than just a winter chill. If indeed the winds will sustain for over a month at 400 MPH, it is suggested that you hide out in the foothills of mountain ranges to protect yourselves.

Howard suggests “Above the 35th Parallel”

Howard believes that it doesn’t hurt to be prepared, and I must say I subscribe to the  philosophy.

Some of Howard’s sources for proof of his theories are revealed in this article. (As well as the radio show, which I do find compelling.)

Howard mentioned Jim Berkland in this interview in relationship to Earthquake predictions.

March 2011  Volcanic Activity, Massive fish die-offs, Birds in the millions falling t there deaths all over the planet.

Who is Jim Berkland?

In an interview published on October 13, 1989, one day before the start of baseball’s 1989 World Series, Berkland predicted that an earthquake with magnitude between 3.5 and 6.0 would occur in the San Francisco Bay Area between October 14 and October 21. The 6.9-magnitude Loma Prieta earthquake occurred on October 17, just before the start of the third game of the Series. Berkland claims that government officials told him not to make any more predictions, fearing mass panic, and he was suspended for two months from his Santa Clara County geology position.In late October, 1989Interviewed on Fox News in March 2011, Berkland predicted an earthquake in California for some time between March 19 and March 26, 2011. He cited as factors the highest tides in 18 years and the proximity of the Moon, suggesting that the quake will most likely strike on Saturday, March 19, 2011. An earthquake sufficient to fulfill that prediction was not reported.

Chile’s Magnitude 8.8, New Zealand Magnitude 6.3, Japan Magnitude 9.0 and THE US IS NEXT. In the week following the huge 9.0 earthquake in Japan, some experts are speculating the United States may be the next region to get hit by a natural disaster. The point of contention involves the Pacific plate, an tectonic plate that lies beneath the Pacific Ocean in a location called the Ring of Fire at 103 million square kilometers; it is the largest tectonic plate in the world.

“Earth’s north magnetic pole is racing toward Russia at almost 40 miles (64 kilometers) a year due to magnetic changes in the planet’s core, new research says.

The core is too deep for scientists to directly detect its magnetic field. But researchers can infer the field’s movements by tracking how Earth’s magnetic field has been changing at the surface and in space.

Now, newly analyzed data suggest that there’s a region of rapidly changing magnetism on the core’s surface, possibly being created by a mysterious “plume” of magnetism arising from deeper in the core.”

“Earth’s outer shell, the lithosphere, long thought to be a continuous, unbroken, crust is actually a fluid mosaic of many irregular rigid segments, or plates. Comprised primarily of cool, solid rock 4 to 40 miles thick,* these enormous blocks of Earth’s crust vary in size and shape, and have definite borders that cut through continents and oceans alike. *[Oceanic crust is much thinner and more dense than continental, or terrestrial crust].
There are nine large plates and a number of smaller plates. While most plates are comprised of both continental and oceanic crust the giant Pacific Plate is almost entirely oceanic, and the tiny Turkish-Aegean Plate is entirely land. Of the nine major plates, six are named for the continents embedded in them: the North American, South American, Eurasian, African, Indo-Australian, and Antarctic. The other three are oceanic plates: the Pacific, Nazca, and Cocos.

The relative small size of the numerous other plates neither diminishes their significance, nor their impact on the surface activity of the planet. The jostling of the tiny Juan de Fuca Plate, for example, sandwiched between the Pacific and North American Plate near the state of Washington, is largely responsible for the frequent tremors and periodic volcanic eruptions in that region of the country.” http://www.platetectonics.com/book/page_2.asp

Even Wikipedia calls 2012 a “Phenomenon”

“The 2012 phenomenon comprises a range of eschatological beliefs according to which cataclysmic or transformative events will occur on 21 December 2012. This date is regarded as the end-date of a 5,125-year-long cycle in the Mesoamerican Long Count calendar. Various astronomical alignments and numerological formulae have been proposed as pertaining to this date, though none have been accepted by mainstream scholarship.”

“A New Age interpretation of this transition is that this date marks the start of time in which Earth and its inhabitants may undergo a positive physical or spiritual transformation, and that 2012 may mark the beginning of a new era.[5] Others suggest that the 2012 date marks the end of the world or a similar catastrophe.[6] Scenarios suggested for the end of the world include the arrival of the next solar maximum, or Earth’s collision with an object such as a black hole, a passing asteroid, or a planet called “Nibiru”.” http://en.wikipedia.org/wiki/2012_phenomenon

“The current economic chaos and global meltdown may be precursors to the transition leading up to December 21, 2012, the day that the 5,125 year-old Mayan calendar suddenly comes to an end, resetting to 0.0.0.0. But what will be the catalyst?”

The ‘catalyst’ was discussed on the show today. Could it be the SUN?  Is there any evidence to support the theory? Well it just so happens that Earth is in a 26 thousand year Solar Cycle .

“Pole shifts are cyclic occurrences on the Earth and the cycles are natural. This is something that happens to the Earth naturally through cosmic cycles that happen like clockwork when looked at from the perspective of celestial events. Spiritual texts in some traditions suggest that these pole reversals happen every 26,000 years and that the north and south pole have switched before more than once. In Hindu texts these cycles are called Yugas. Even the Bible says in Isaiah 24:1, “Behold, the Lord makes the earth empty, and makes it waste, and turns it upside down.” The Mayans also have records and legends of such occurrences. Somewhere in humanity’s innate knowledge, this information is within and is recorded in a way that could be taken quite literally in light of today’s challenges with the possible 2012 polar shift coming soon. Scientific proof and evidence shows that there have been pole reversals before on Earth as well.

NASA seems to be on another page entirely claiming that A pole shift is impossible. Really?

” A reversal in the rotation of Earth is impossible. There are slow movements of the continents (for example Antarctica was near the equator hundreds of millions of years ago), but that is irrelevant to claims of reversal of the rotational poles. However, many of the disaster websites pull a bait-and-switch to fool people. They claim a relationship between the rotation and the magnetic polarity of Earth, which does change irregularly, with a magnetic reversal taking place every 400,000 years on average. As far as we know, such a magnetic reversal doesn’t cause any harm to life on Earth. A magnetic reversal is very unlikely to happen in the next few millennia, anyway.”

NASA comments on a Solar Storm

“Q: Is there a danger from giant solar storms predicted for 2012?
A: Solar activity has a regular cycle, with peaks approximately every 11 years. Near these activity peaks, solar flares can cause some interruption of satellite communications, although engineers are learning how to build electronics that are protected against most solar storms. But there is no special risk associated with 2012. The next solar maximum will occur in the 2012-2014 time frame and is predicted to be an average solar cycle, no different than previous cycles throughout history.”

Earth, as seen in the Blue Marble: Next Generation collection of images, showing the color of the planet’s surface in high resolution. This image shows South America from September 2004. 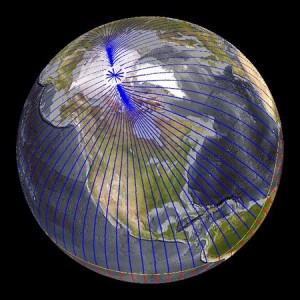 NASA also reports: ” Given a legitimate need to protect Earth from the most intense forms of space weather – great bursts of electromagnetic energy and particles that can sometimes stream from the sun – some people worry that a gigantic “killer solar flare” could hurl enough energy to destroy Earth. Citing the accurate fact that solar activity is currently ramping up in its standard 11-year cycle, there are those who believe that 2012 could be coincident with such a flare.”

But this same solar cycle has occurred over millennia. Anyone over the age of 11 has already lived through such a solar maximum with no harm. In addition, the next solar maximum is predicted to occur in late 2013 or early 2014, not 2012.

The Solar and Heliospheric Observatory (SOHO) spacecraft captured this image of a solar flare as it erupted from the sun early on Tuesday, October 28, 2003. This was the most powerful flare measured with modern methods. Credit: NASA/SOHO Most importantly, however, even the biggest solar flares are not powerful enough to physically destroy Earth.   http://www.nasa.gov/topics/earth/features/2012-superFlares.html

A note from Roxy Lopez

At the end of the day, I intend that the Mayan’s December 21st 2012 date is not intended to be a catastrophic doom and gloom  ‘end of the world’ scenario, rather an end to an age of man. An end to slavery, tyranny, lower vibration, murderers, controllers, torment and Environmental annihilation that only equates to death.

I prefer to gaze into the future in hopes of great change, a new beginning, an evolution of mankind known to me as a quantum leap of consciousness. I believe humanity has the opportunity to evolve, and believe me it is time!

You can count on me to be on the radio, barking out instructions to all who will listen until the end (if there is such a thing). I personally do not see myself as Howard sees himself, being a part of rebuilding the earth!  I admire Howard’s courage for even contemplating this far out, as well as coming forward to tell his truth.

The fact is, we all can change the outcome! We have the power to collectively change the shift from occurring, and this is where I prefer to focus my energy on, a new world that does not have to end first.

As Howard said, even he hopes he’s wrong, and if so, I will be one of the friends in his life that will be toasting to the New Year, saying “I told you so!” Howie, we love ya, but hope you are absolutely wrong!