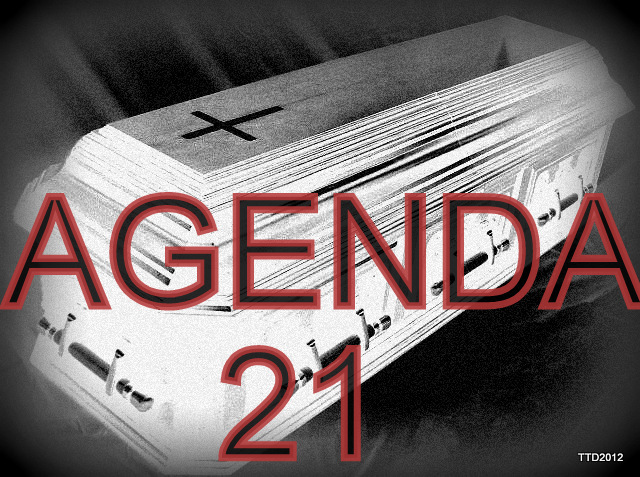 At first glance, the  AGENDA 21 document seems like a way to manage the worlds food supply, environment, public health issues, energy and housing and the likes. But if you really read it, red flags  begin to pop up. Could this actually be the beginnings of a global government? And though many have already asked this question, is it about management, or CONTROL?

For instance, did science  ever really  prove that we are in a global warming cycle?

“Humanity is sitting on a time bomb. If the vast majority of the
world’s scientists are right, we have just ten years to avert a
major catastrophe that could send our entire planet’s climate system
into a tail-spin of epic destruction involving extreme weather, floods,
droughts, epidemics and killer heat waves beyond anything we have
ever experienced – a catastrophe of our own making.“
– Al Gore,
An Inconvenient Truth

“Each local authority should enter into a dialogue with its citizens, local organizations, and private enterprises to formulate ‘a Local Agenda 21.’ Through consultation and consensus-building, local authorities would learn from citizens and from local, civic, community, business and industrial organizations and acquire the information needed for formulating the best strategies.” – Agenda 21, Chapter 28, sec 1.3

So what exactly does the  Agenda 21 Document contain? Why should we be so concerned?

It consists of 115 different and very specific programs designed to facilitate, or to force, the transition to Sustainable Development. The objective, clearly enunciated by the leaders of the Earth Summit, is to bring about a change in the present system of independent nations. The agenda is broken up into 8 ‘programme areas for action’:

This is just the beginning.Concerns that should run deep for citizens, especially surrounding some terms that are quickly changing like ” Global Warming”,  now now known as  Climate Change and Climate control. Take a look at this document, written in 2002, entitled ADAPTATION OPTIONS IN AGRICULTURE TO CLIMATE CHANGE: A TYPOLOGY
Or check out United Nations Environment Programme written in 2012. http://www.unep.org/climatechange/ that even highlights  weather modification, something that isn’t even supposed to exist! The introduction clearly spells it out on page 1:

“Adaptation is an important component of climate change impact and vulnerability assessment, and is one of the policy options in response to climate change impacts (Fankhauser 1996; Smith and Lenhart 1996; Smit et al. 1999). Indeed, the signiﬁcant role of adaptation as a policy response by government has been recognized internationally. Article 4.1b of the United Nations Framework Convention on Climate Change (UNFCCC 1992) states that parties are ‘committed to formulate and implement national and, where appropriate, regional programs containing measures to mitigate climate change and measures to facilitate adequate adaptation to climate change”

TTD recommends reading the following article because it clearly spells it out, entitled THE GREEN AGENDA.

He states: : Following the Earth Summit Maurice Strong was named Assistant Secretary General of the United Nations, and was appointed to the position of Chief Policy Advisor by Kofi Annan. He was also a member of the UN’s Commission on Global Governance, and the key architect of the Kyoto Protocol. Strong and his wife have also established the Manitou Foundation, providing land in the Colorado to an eclectic mix of religious groups, including the Crestone Mountain Zen Center, the Spiritual Life Institute (a Catholic Carmelite monastery), the Haidakhandi Universal Ashram, the Sri Aurobindo Learning Center, Mangala Shri Bhuti (Tibetan Buddhists), and Karma Thegsum Tashi Gomang (Indian mystics). The Strongs have located their spiritual centre in the Colorado mountains because:“The Strongs learned that since antiquity indigenous peoples had revered this pristine wilderness as a place for conducting their vision quests and receiving shamanic trainings. It is prophesied that the world’s religious traditions would gather here and help move theworld toward globally conscious co-existence and co-creation.”
References are all over the internet to Agenda 21, some of which are buried in websites such as The National Climate Assessment (NCA), which is being conducted under the auspices of the Global Change Research Act of 1990, which requires a report to the President and the Congress that evaluates, a report to the President and the Congress that evaluates, integrates and interprets the findings of the $2.6 billion USGCRP every four years.”

If you are really eager to dig deeper, check this out, it is the 2009 ASSESMENTS  (4 years of scientific studies of Global warming results )http://www.globalchange.gov/index.php?option=com_content&view=article&id=64&Itemid=76

Here is a letter addressing climate change in  from Arizona , as an example of what our government is up to. http://www.azclimatechange.gov/download/O40F9347.pdf

If you have reports from your local government, we would liek to see them, so PLEASE feel free to contact us at info@thetruthdenied.com.

Stay Strong, and keep you eyes open, together we can get the control back to the people. In the meantime, we simply have to become aware of what has been going on behind our backs for quite sometime.

Be sure to join us every Tuesday night on THE TRUTH DENIED TALK RADIO for similar topics!!!!