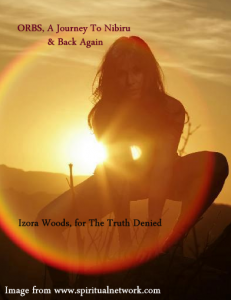 Orbs, Spirit guides or evidence of a man-made painted sky?

As an avid sky watcher and member of groups that share our photographs, I noticed an increase in the last year in the number of photos with orbs and odd shapes of light and reflections in them. I have gotten into a few discussions and we have tried to figure out what causes them; are they merely light refracting off dust particles or moisture droplets in the air, lens grit, or reflections of the metallic particulate clouding our skies. There are many sites with articles and photographs by those who desire to prove them as spirits, ghosts or portals to another dimension, and those who attempt to prove them away as simply light reflecting off various types of debris in the atmosphere. Researching for this article led me to another possibility I had not previously considered – and now I wonder – are they evidence of something else entirely? Let’s consider some of the possible causes of orbs in chemtrail photography. 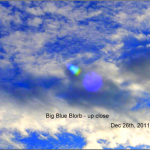 The image search for orbs, dust particles, orbs and chemtrails, in photos … Image 2, below (http://orbs.net/) is typical of orbs -circular, light, random orbs with some minor variations in size, quantity, color intensity. 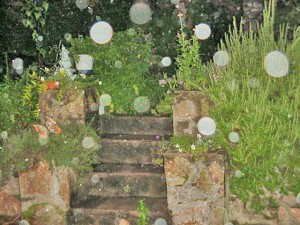 The orbs that got my curiosity looked nothing like these white lights and I couldn’t find many photos of the orbs or reflections that I had been seeing in my photos and those of my fellow sky watchers. But this is a good example: Image 3 from forum.davidicke.com shows a red orb within the halo and a larger circular orb below. 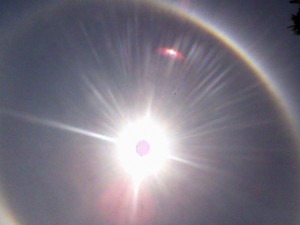 Image 3 A ring around the sun or the moon is also called a halo, note the red orb at 1 o'clock @ ForumDavidIckie.com

Lens flare is created when non-image forming light enters the lens and hits the camera’s film or digital sensor. This often appears as a characteristic polygonal shape, depending on the shape of the lens diaphragm. These flares take the form of polygonal bright regions (usually 5-8 sides). These orbs or lens flares I witness are at times brilliant shades of blues, purple, green, orange, red, pink and not all circular – but they are most often seen in photos that include the sun and taken in a chemtrail artifact sky.

Like the red one above and the pink and blue ones in the next photo – I have determined to call these large orbs shaped like; ovals, blobs, light bulbs: Blorbs. The rest of the photos are from my collection and this is where things began to get interesting. I began by looking for photos like this one. 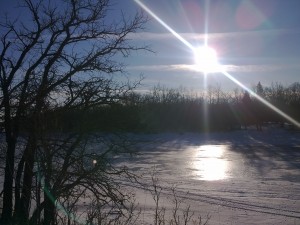 Image 4: This was the type of orb reflections I was seeing more and more on chemtrail photography.

Image 4 is a good example, it has the pink blorb-like reflections above the sun, but as I looked closer I also noted two other orb shapes in the lower half of the picture; one orange orb, the other a neon snake shape. As you can see these are very different than the white orbs seen in image 2. With the exception of the small orange orb in the lower tree branches – none of these are circular.

Rich at Midnite Walkers, Paranormal Debunkers site set out to prove how easy orbs in photos can be faked. He shows that orbs can be caused by dust particles and has gone to the effort of showing which type of dust creates which orb – color and density. I have included this photo from his site. He has included everything here from outside dirt to vaccum and dryer lint! 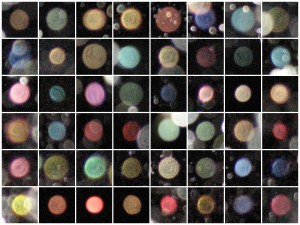 This is a composite image of colored dust orbs and it is a convincing explanation for the presence of these circular colored orbs and I am satisfied that moisture droplets would act in much the same manner. This close-up then of the pink circular orb cropped from image 4 could then be explained as either a dust or moisture droplet in the air or on my lens as well as lens flare. 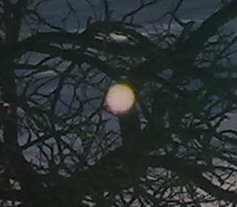 So what caused the green snake orb? 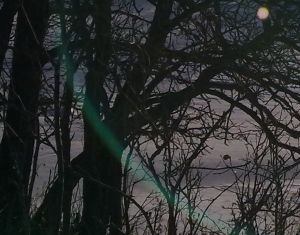 My first thought was movement, but that does not account for the pink orb being perfectly circular in the same shot, if movement caused the green orb – then logically the round orb should have a tail. Flares could still be a valid explanation for these different ‘orbs’ within the same photograph – because flares can take many forms, and this may include just one or all of the polygonal shapes, bright streaks.

So they are not all caused by dust or moisture particles – or they would all be similar in shape. It cannot be shutter movement or all the orbs/images in the photo would also have some trail. Sun flare could be responsible for these pink and green/blue/neon blorbs.

Some people believe these daytime orbs are visible portals into another dimension with a general increase in sightings due to the chaos of our times. I can’t prove or disprove this – and like other paranormal events – I will leave that to others.

But what of the other worldly explanations? When I watched this video I was amazed at the beauty and diversity of orbs – I had never seen orbs like these before and I want to believe that maybe – maybe it is spirit using the materials from the man-made painted sky and trying to reveal itself to us.  So check out the Orbs in this amazing short video taken in Victoria BC;

My left brain continued to tell me that these orbs, colorful and magical as they are could be explained by light being reflected and refracted. Likely that due to the millions of tons of aluminum particles sprayed in the sky it is creating mirror like reflections that are enhanced with the digital camera experience? This would explain the increase in photos of them. But I mentioned an altogether different journey and these next photographs should show you the way. 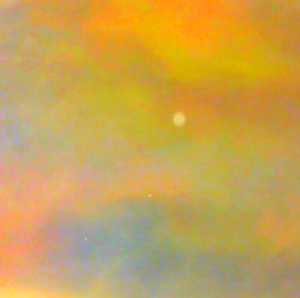 Cropped from another picture, three orbs in chemtrail articfact.

This is a cropped section of a photo taken over my home on March 7th of this year. I pulled out the orb image and if you are able to zoom in on it – it appears to have some depth – note also the two small orbs below and to the left. I proceeded to look for more of these tiny orb images and was surprised to find several that have the same orb shapes, usually three together, usually aligned and always within a chemtrail artifact sky. Lets consider what we know about orbs – they are generally circular, white or pale colored and random. The moon creates a visual orb in the sky, it is light, but unlike dust and passing light motes it is consistent – it is clock work.

Many of you are aware of this theory – Nibiru or Planet X is thought to be orbiting on a trajectory that will bring it close to earth on December 21 – potentially causing catastrophe – like it did the last time – the Great Flood of Noahs day, the sinking of Atlantis and others. Some skywatchers believe that the chemtrail spray is to obscure not just the sun- but also to obscure secret things. A quick youtube search will reveal many videos regarding this as well as a number of ‘sightings’. This image shows the supposed orbit of Nibiru.

The following pictures will show you something different, something that cannot be explained away as dust or moisture particles, or lens grit. These orbs I found after looking through only a few albums; they are all circular, light colored but they are unlike orbs – they are like the moon – not random. In fact they are aligned, just like a planetary alignment and remain so through many photos. This got me wondering about the possibility of Niriru or Planet X!  I also found some photos on the web – similar to mine as evidence of a second sun or proof of Nibiru being hidden by chemtrails operations. That the truth is being denied. 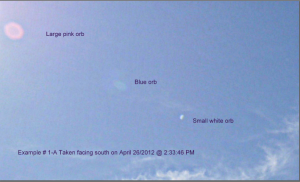 Small blue orb with 2 others 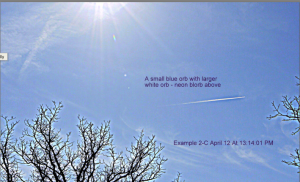 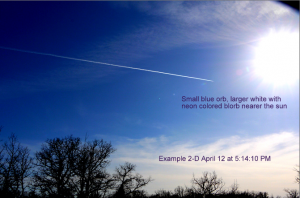 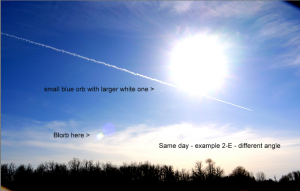 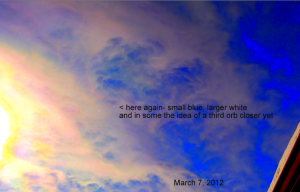 another small blue orb with a larger white orb, aligned 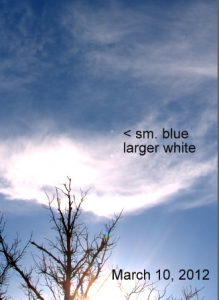 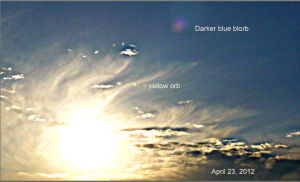 Imagine my excitement – had I stumbled on a truth, am I seeing another planet, a planet on a trajectory collision course with earth? Possibly … then on Saturday I sat down to watch a movie  –  the opening credits were filled with images of the sun and sky -with reflections of Orbs, Blorbs and yes, even aligned orbs. I rethought my premise, in some of the photos the small blue orbs and the white orbs seemed to be in a direct line with wherever the larger Blorb was situated, either above or below but – aligned!

Back to the photographs … and viola’ 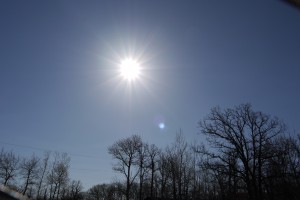 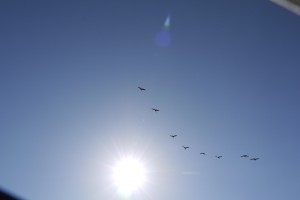 As these two photos show, that in just 3 seconds the orbs moved from the bottom of the sun – to the top, the only change being a slight movement to capture a different angle of lens flare. It appears that truth is simpler than fiction.

Some advice to prevent flares in your photography:

While there does not seem to be a great mystery to the orbs in photographs – I maintain that the increase is evidence to the amount of metal/reflectant particles being sprayed in our atmosphere – so they may have some use as part of our evidence gathering efforts. In the meantime I am going to contiunue to browse through my photos and zoom in and see what truths or lies I will find there.

Here are a few resources and a video I made with the photos posted.

If you have photos of orbs, please feel free to send them to info@thetruthdenied.com

2 Responses “Orbs, A Journey To Nibiru & Back Again”