In his own words,  witness Sean Gautreaux describes the unthinkable  attack on the USA, the first since the Japanese attack on Pearl Harbor, Sunday, December 7, 1941. Before we get into   Sean Gautreaux’s story, lets compare two relative events and statistics that were published regarding loss of lives, etc.

Let’s compare the Bombing of Pearl Harbor and 911. 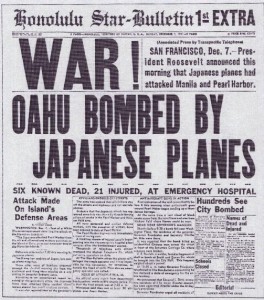 At 06:05 on December 7, the six Japanese carriers launched a first wave of 183 aircraft composed mainly of dive bombers, horizontal bombers and fighters.

The Japanese hit American ships and military installations at 07:51. The first wave attacked military airfields of Ford Island. At 08:30, a second wave of 170 Japanese aircraft, mostly torpedo bombers, attacked the fleet anchored in Pearl Harbor. The battleship the USS Arizona was hit with an armor-piercing bomb which penetrated the forward ammunition compartment, blowing the ship apart and sinking it within seconds right in the harbor, which turned out to be a strategic move by  Japan. It was one of eight US battleships at the dock, five of which were sunk and the remaining three were badly damaged. Overall, 9 ships of the U.S. fleet were sunk and 21 ships were severely damaged. 3 of the 21 would be irreparable.

The overall death toll (for Pearl Harbor)  was 2,402 and 1,282 wounded, including 68 civilians. Of the military personnel lost at Pearl Harbor, 1,177 were from the  USS Arizona.

Now please keep in mind, we were at war with Japan, and the attack was an act of retaliation to the USA cutting off there supply of oil. What later ensued in 1945 was even more tragic than the bombing of Pearl Harbor, which was the first Atomic bomb that was used on Hiroshima and Nagasaki, which ultimately ended the war.

According to published statistics, take a look at the death toll from 911:

There were 266 people on the four planes:

There were 2,595 people in the World Trade Center and near it, including:

There were 125 civilians and military personnel at the Pentagon.
1,609 people lost a spouse or partner on 9/11. More than 3,051 children lost parents.
While it was mostly Americans who were killed in this horrific attack, there were also 327 foreign nationals.

Ask yourselves some questions:  Keep in mind the statistics above.

The USA PATRIOT Act (officially the Uniting and Strengthening America by Providing Appropriate Tools Required to Intercept and Obstruct Terrorism Act) was quickly developed as anti-terrorism legislation in response to the September 11, 2001 attacks. The large and complex law received little Congressional oversight and debate, and was signed into law by President Bush Oct. 26, 2001.

PATRIOT gives sweeping search and surveillance to domestic law enforcement and foreign intelligence agencies and eliminates checks and balances that previously gave courts the opportunity to ensure that those powers were not abused. PATRIOT and follow-up legislation now in development threaten the basic rights of millions of Americans.http://w2.eff.org/patriot/

. All photos were taken by Sean prior to the event, and unfortunately he did not have a camera handy on 911.Read his story now:

“The early morning of Tuesday, September 11th, 2001, was refreshing in terms of weather. It was the first cool morning after a Summer of very warm mornings. A clear blue sky with a light wind from the NorthWest greeted me as I left for work at 8am. I walked the short few blocks to the New Jersey Transit subway station at the edge of the Hudson River in Jersey City. My destination was the Hoboken Train Station, where I would then catch a train at 9am to bring me out to Fairlawn, NJ, where I worked as an Art Supervisor at a video game developer.

The subway promptly arrived in Hoboken at precisely 8:46 every morning, allowing me a few minutes to grab some breakfast on the way out. As I was walking to board the train, I looked to the far edge of the platform, where there was no protective awning over the trains. I saw a group of people staring across the river. It wasn’t atypical, as incoming, tourists groups would gather there to take in their first view of the World Trade Center. I boarded the train, and had a seat in my normal spot, in the last car, in the middle, facing backwards. My friend, Mike, who worked at the company next door, also got on the train. We, being single, both noted to each other the unusual amount of young, professional women on the train. Our ride was always fairly desolate with just a few people per car, as a majority of the people were travelling into Manhattan via Hoboken. Our destination was 30 minutes to the West.

The train revved up the engine at 8:59 and started moving out from under the awning at 9:00 on the dot. Once the last car cleared the awning, the train stopped. I looked up to see Tower #1 spewing massive black clouds. “Holy… shit…” were the first slow words. Mike moved to my side of the car to see the view. I could not determine what had happened, as the smoke filled the airplane cavity, hiding it.

Gasps were heard from the others. We just sat there and watched.

At 9:03, the train conductor came by, business as usual, and collected my ticket. As he did, he said, “Here comes another one,” meaning the second plane. For some strange reason, I did not see the second plane. I have very good vision. He was standing; I was sitting; he had glasses; I did not.

As the orange ball of flame slowly erupted from the corner of the South Tower, my eyes first fixated on the floors of glass windows exploding outwards towards the West. The orange slowly turned to black, expanded and moved upwards. More gasps from the riders.” 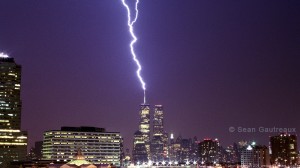 “At some point, the train started to move again, taking us to the places of employment. We cleared the first tunnel and started the straight path West. I sat, still stunned, and watched the Towers burn through the window in the back of the car.” ~ Sean Gautreaux

The commute was fairly quiet, with quiet conversations here and there. At the far side of the train car, next to the entrance to the next car up, sat a group of 3 people, all about 20-25 yrs old. For some reason, speaking in a foreign language, they were laughing and carrying on. Had these 3 not seen what had just happened? They must have been in the car at 9:03 and experienced what we did. Moreover, they were sitting at the window. What was so funny?
Mike and I got a ride from the Fairlawn Station to work from one of his co-workers. It was the first radio reports that we heard. It wasn’t looking good. Other planes were apparently still in the air. We gathered around the TV in the Maxell office to watch each tower fall.

Getting back to Jersey City was just not possible that day. The trains system was only going away from Manhattan, no longer into it. Moreover, Jersey City, just across the river from lower Manhattan, was being used as a field hospital and evacuation area. A co-worker eventually picked me up from a canceled work place and brought me with him to where he had originally planned this Tuesday off, at a picnic at his girlfriend’s friends’ house, further out in New Jersey. The combination of a good ole’, meat-burning, American BBQ and TV reports of thousand dead was surreal to say the least.

I arrived home the next morning to the condo I rented at 205 10th St. I rented the condo for the view. The 18 paned, 20 foot by 14 foot, glass wall with several sliding panes allowed a view from the Statue of Liberty, to Battery Park, to the Trade Center, to the Empire State Building, Upper Manhattan and all the way to the Washington Bridge to the North. In 2000, I used this opportunity to photograph Manhattan at any time, any season. My favorite subject on the skyline, the World Trade Center, had me spending many rolls of 35mm film. Day, night, dusk, dawn, snow, clouds, lightning, fireworks were all captured in their relation to the two massive monuments in that year. In fact, my best photo ever, in my opinion, was the one that immortalized a night in July where after hours of trying, I captured a very strong, but silent, lightning bolt hitting the antenna on the North Tower. It was after a rain storm, and I attributed the bolt to “residual
energy” in the sky, whatever that means. There are very, very photos of that type of occurrence, even though the lightning rod on top of Tower 1 was designed to attract lightning away from other nearby buildings. My collection of photos was never really published.

I took some photographs of the area after 9/11, but there didn’t seem to be a point. Instead, after work, I would come home and sit at the computer, next to the window wall, and stare out, wondering why. It was hard to do side work while at home, and searching for info on the attacks lead me into some questions about how it all went down. Rumors of conspiracy, inside jobs, holograms, false flag operations started popping up in the first few weeks via online channels. Hearing Cindy Adams of the NY Post pleading for any information on the 12 white-robed men praying at the foot of the buildings the night before had me wondering. Hearing about cops not seeing any food vendors around the WTC that morning made me question. Hearing an acquaintance tell a group of friends about how his Rabbi, on Saturday the 8th, told his congregation to pull all their money from stocks on Monday, the 10th, made me think. Finding the report of the Israeli group in
Jersey City, filming and cheering the attacks, had me perplexed. At one point I sat at my desk, smelling the burnt electrical smoke of the 99-day underground inferno via a SouthEast breeze, and found the reports of truck loads of gold leaving the Tower basement the day before it happened. A month after the events, while young men and women were signing their lives away to find a man in a cave, I did not believe the official account.

11 years later and the ones truly responsible for that day still go free and unpunished. They do not reside in a cave. They live here, in this country, in mansions that we paid for.

This morning, Tuesday, September 11th, 2012, a friend posted a request online asking friends, “Where you were born?” I replied, “On an outbound New Jersey Transit train, 11 years ago…”

I ask the American people this question; Do you feel that you have more or less freedom than you had in the year 2000?

We would love to hear your answers!

Sources used for this story: