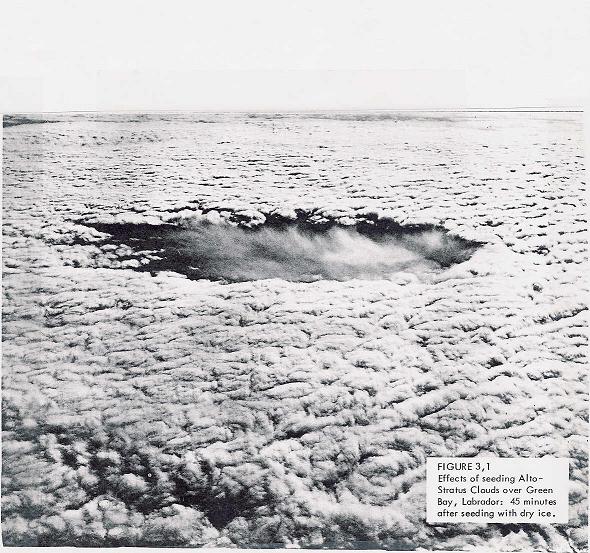 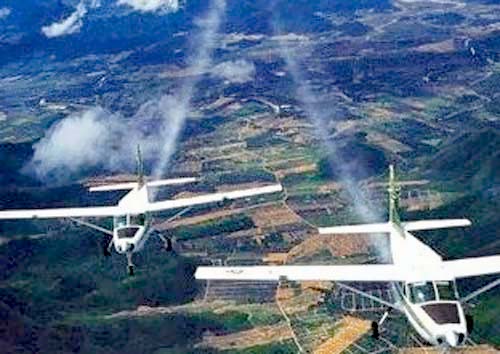 So what’s the difference?

For one, cloud seeding is performed  in lower altitudes, generally under 10 thousand feet, or where rain clouds accumulate, nimbus clouds. Chemtrails are being sprayed at much higher altitudes, generally  much higher than rain clouds, at stratosphere, where cirrus clouds reside. Trails are known to cause cirrus clouds so much that term invented to call them, contrails cirrus.

According to the official statement.
South Texas Weather Modification Association FREQUENTLY ASKED QUESTION
12. Is there any link between cloud seeding and chemtrails?
No. STWMA, along with the WMA, is unaware of any connection between cloud seeding as is practiced by our program and to what some refer to as “chemtrails” (chemical trails). Contrails are normally observed on otherwise clear days, when cloud seeding would not be conducted. The cloud seeding nuclei from ground or airborne sources do not produce such visible clouds.

There is nothing wrong in that statement. Because they are simply different.

Texas Weather Modification Frequently Asked Questions
Not all cumulus clouds become rain producers. In fact, only a small percentage of them ever develop the capability to yield an appreciable amount of rainfall. Those convective clouds that do produce rainwater are often inefficient: For all the moisture they incorporate from below, only a tiny fraction of that moisture (as cloud droplets) is ever used to grow large raindrops, which ultimately fall to the ground as rainfall. This may be due to the fact that an insufficient number of ice particles exists within the cloud, thereby limiting the amount of cloud droplets that can coalesce to create raindrops. Or the clouds simply do not live long enough, on their own, to allow those tiny cloud droplets to collide enough times with neighboring droplets to yield larger drops–and eventually rainwater. Seeding is intended to introduce into the cloud many more of these ice crystals (also called cloud nuclei) to allow much more of the moisture supply within the cloud to be converted into rainwater.

If done in a timely way and properly, cloud seeding can assist the natural process in clouds by giving them enough “seeds” to make a meaningful number of large raindrops. If a lot of the growing convective cloud has pushed upwards above the freeze level, the bulk of the cloud water above that freeze level becomes supercooled (which is to say, the cloud droplets remain in liquid form and do not turn into ice). But those supercooled cloud droplets readily attach to an ice crystal (natural or artificial), converting the ice crystal into a tiny snowflake or graupel, which can quickly grow into a raindrop before the cloud begins to collapse.

Silver iodide is a favored seeding agent because its crystalline structure is nearly identical to the natural ice crystal. When placed in the upper portion of the growing convective cloud rich with supercooled droplets, the silver iodide crystal can grow rapidly by tapping that vast field of available moisture. Indeed, because the vapor pressure gradient over ice is less than that over water, an ice crystal such as silver iodide will more readily attract the tiny cloud droplets than those droplets will collide with each other. In a matter of moments, the ice crystal is transformed into a large raindrop which is heavy enough to fall through the cloud mass as a rain shaft.

Chemtrails produce the opposite results
While chemtrails do create clouds, it would be high altitude clouds, with a recognizable specific unnatural repeated pattern. Chemtrails have eliminated low altitude rain clouds (which is a  requirement of cloud seeding), warm the atmosphere and the ground. The trails can be seen because they absorb surrounding water, this reduce the chance of rain, which create drought conditions. Not only that, the next rain will pour down heavier, because of the colection of all the failed rain, create intense and long rain, creating flood after long period of drought. The drought and the flood soon after will devastate crop and produce significant damage to the civilization and environment. The released particle also reduce ozone layer and increase the chance of acid rain which also damaging to the environment.

Cloud seeding usually done for people’s benefit. It has been used to ease hurricane, to reduce rain in the land by forcing the rain to fall more at the ocean, to produce more rain during drought, to stop forest fire that can cause smoke that can hamper the activity of a lot of people. Cloud seeding was done to save people.

Cloud seeding is the farmers friend, chemtrails on the other hand, are the farmers enemy. Thailand’s farmers really love their king who improved the way to make rain. Thailand’s king is the scientist behind Thailand famous rain making operation. See more here:
Father of Royal Rainmaking.

The means of delivering aerosols differs. Cloud seeding were usually done with a slow propeller plane, much like a crop duster. Chemtrails are always seen coming from high speed jet planes. The proof can be seen on thousands of websites throughout the world via photos  taken daily by the general public. Just GOOGLE the word Chemtrail, check it out for yourselves.

Video below exemplifies a plane spraying salt right on top of rain clouds:

Some people use silver colloid as cure. Iodine is also a recommended mineral suplement. Both combine into silver iodide. Material safety Datasheet indicate that silver iodide can produce irritation at the event of ingestion or skin contact. Others use NaCl salt, just like table salt that we usually add to our food.

In the video below, you will see that the passenger is actually sitting next to the material for the cloud seeding operation, right inside of  the cockpit. Available photos for chemtrails show tanks, not plastic bags. We could also see patterned clouds lingering at higher altitudes, similar to jet contrails formed after they are materialized in our skies daily.

In that video we can see the worker tear apart the NaCl salt container and pour it to clouds at 8000 feet, some of the worker do not even use mask. The ship, Lockheed C-130 Hercules, belong to the Army, fly through the rain clouds for two hours of seeding, was carrying 4 tons of NaCl.

We should be careful not to condemn an operation that clearly produces good results and benefit to people. Cloud seeding results is in contrast with chemtrails. Chemtails can cause an array of illnesses to all living things on the planet, including humans. Clearly there are no known benefits to chemtrails.

Still, let’s keep in mind that  just like other geoengineering and cloud modification programs, cloud seeding may also  invite disaster. We know now that Thailand  has endured severe flooding after cloud experimentations have been performed.  Queensland Australia, which was also hit by severe and disastrous  flooding earlier this year  were also associated with cloud seeding programs. China, who used missiles for cloud seeding also reported heavy to  severe flooding .

Now you know the difference between general cloud seeding programs and chemtrails based on there ingredients, would you say that either  of these programs should be allowed to continue without the public’s consent?  The last I checked, I personally  did not approve any of these weather modification programs, nor did any of my friends. I am sure of one thing though, that Science is playing God with all of our lives, and in the case of chemtrails, it  hasn’t proven to be anything but one giant covert operation based on money and greed.

Of course, that is just one mans opinion, for whatever it’s worth.

19 thoughts on “Cloud Seeding is NOT Chemtrails”